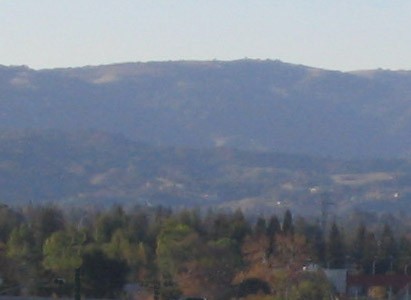 An Introduction to Monte Sereno, California

Nestled against the base of the Santa Cruz Mountains on the west side of Santa Clara County (about an hour south of San Francisco and a few minutes from San Jose), adjacent to the town of Los Gatos, Monte Sereno is a scenic, small city which is semi-rural  with neither sidewalks nor street lights. It has, in fact, the tiniest population of the 15 cities within the County, having just about 4000 residents in about 1.6 square miles.  There are no businesses in town, just residences, the city office and post office, and Daves Avenue School. It is one of the most highly regarded and upscale communities in Silicon Valley.

Monte Sereno enjoys many rolling hills and green views of the coastal range, particularly El Sereno, the peak of which rises over the the city and has an elevation of 2249 feet.  There is an open space preserve there now, with 1415 acres and 7.4 miles of trails.  Please see the El Sereno Open Space Preserve website for information on parking, trail maps, equestrian trails, and more. As you might imagine, the city is named for this mountain: monte – mountain, sereno – serene, calm or pleasant.  And it is a pretty calm place to be.

Monte Sereno shares schools, police, parks and the library with the town of Los Gatos, so they have much in common.

Almost 100% of Monte Sereno falls into the 95030 zip code, with a very tiny sliver belonging to the 95032 zip code. Both of these zip codes are also utilized by neighboring Los Gatos.

Of the approximately 1250 households in Monte Sereno, all but about 60 of them fall within the boundaries of the highly regarded Los Gatos School District. The other small minority is in Campbell Schools.  (You can check the assigned schools on this website: SchoolAndHousing.com)

The Santa Clara Valley generally became settled by non-natives beginning in the 1770s and this area in particular was part of the land grant of 1839 that was given to the two gentleman, Peralta and Hernandez, who in some ways “founded” Los Gatos with their Rinconada de Los Gatos land grant. (It was a good deal: they only were required to live on the land to receive it at no cost.  Later, property taxes were introduced and they were forced to parcel off chunks of this prized terrain, unhappily for them.)
Monte Sereno is probably most famous for a past resident, John Steinbeck, who wrote Of Mice and Men and East of Eden at his home on Greenwood Lane (prior to the city incorporating).

In the middle 1950s, the Santa Clara Valley was experiencing a too-rapid growth period with many annexations.  To prevent itself from falling victim to this and to keep the area more rural, Monte Sereno became incorporated in 1957. During a period of great expansion for the nearby city of San Jose, Monte Sereno became incorporated to make sure that it wasn’t annexed to either that large city or to neighboring Los Gatos, with which it shares many services (schools, library, parks).  It would be a mistake to consider Monte Sereno a suburb of Los Gatos (which has about 30,000 residents and 10 square miles).

The official website for the city of Monte Sereno

Hours: Monday– Friday 9am to 5pm

Homes for sale in the city of Monte Sereno

Check out the live charts here:

2 thoughts on “About the city of Monte Sereno”