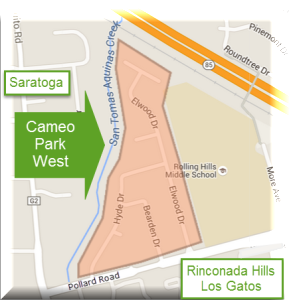 Los Gatos, Campbell, and Saratoga meet near the intersection of Quito Road and Pollard Road in the far northwest end of LG. People driving through for the first time are often confused about what city is where. To complicate matters, some areas belong to one municipality but have the mailing address, or postal label, of another.

Such is the case with Cameo Park West, a lovely residential pocket of Campbell which is a bit of an outpost for that city and hence has a Los Gatos mailing address to make it simpler for letter carriers. The schools, of course, are not impacted either way since they have nothing to do with the city or town boundaries.

This popular neighborhood, which has claims of some sort to both areas is well built and well kept. For Los Gatans commuting to Cupertino or Sunnyvale, homes in west Los Gatos and nearby offer a shorter commute than from downtown LG or east Los Gatos.

The houses found along Elwood Drive, Hyde Drive, Hyde Court, Bearden Drive, and Pollard Court were built mostly in 1966 and 1967 by a well respected, San Francisco Bay Area builder of houses, Leep Homes. There were many extras that went into homes built by Leep, among them copper plumbing (well before that was typical), two way fireplaces, front porches, formal entry halls, step down living rooms, central forced air heat, wood shake roofs (originally, now most are composition shingle) and beautiful hardwood floors. This builder was active in Santa Clara County and we see Leep subdivisions throughout San Jose, Los Gatos, Campbell and many other places within Silicon Valley.

Most houses are “interior” to the neighborhood, but some are close to or face Pollard Road, others are next to the freeway (and with it, the high voltage power lines & towers and also the train tracks) or the school or the creek. Many would prefer a creekside setting or a school as a back neighbor, but not everyone shares that feeling.

As of this writing, late July 2018, in the current market homes have sold between about $1,500,000 and $2,000,000. Homes may still sell as low as $1.5 million or less if they’re small, have location issues and / or fixer uppers, but within the last year one sold as high as $1,805,000. Prices will be higher for the best locations in the neighborhood (away from Pollard Road, away from the freeway / train tracks / power lines).   Some buyers prefer to be adjacent to Rolling Hills Middle School and some prefer not – but that could influence pricing too. The home’s size and condition, meaning how remodeled and well maintained it is, are major factors too. A terrible home next to the high voltage lines & free that’s also small will not fetch nearly so high a price as one which is fully remodeled and in a more interior location in the subdivision.

What homes are for sale in Cameo Park West right now?

Below is a map search showing the currently available real estate listings of houses for sale in this Campbell – Los Gatos neighborhood.

If you are interested in selling or buying a home in Cameo Park West, in Los Gatos, Campbell or anywhere in Santa Clara County, please give me a call – I’d be happy to chat with you (no obligation, no pressure).