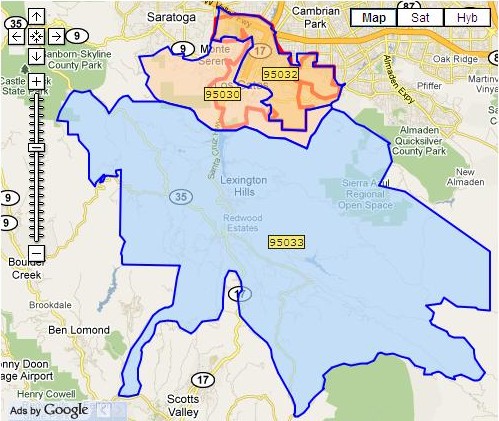 How do the various zip code areas covering Los Gatos compare to one another?

A few years back, the US Post Office rearranged the boundaries for the zip codes a bit (see map of Los Gatos zip code boundaries), but 95030 tends to be the downtown Los Gatos area and 95032 flanks it east, north and northwest, and 95033 is the area of the Los Gatos Mountains.

Any of them, by the way, might be in the Los Gatos Union School District (or not).

When this post was written, I used a source called ZipSkinny, which unfortunately is now defunct.  There are other zip codes and demographics sites around, but they don’t compare multiple zip codes like ZipSkinny did.  Numbers below were taken from that site.

Check it out – it’s a free site and is an interesting set of data to see.