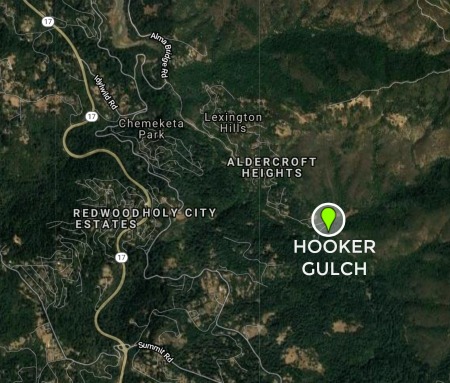 Maps can be so intriguing, and they can be a dangerous rabbit hole into which my time somehow disappears if I’m not careful. Today I was viewing a topographical map of Los Gatos when I stumbled upon a place in the Santa Cruz Mountains near Los Gatos (aka the Los Gatos Mountains) with the curious name of Hooker Gulch.  That same site is an interactive map with many place names that I never heard of in the coastal range, all of them begging for research. (Click at your own risk.)

Here are a few of odd and fascinating place names in the hills:

Where is Hooker Gulch?

The steep valley is located near the end of Aldercroft Heights Road (public section of the road), close to Aldercroft Heights, Lexington Hills, and Holy City in the Santa Cruz Mountains. It is just south of Old Gold Mine Road.

Where did the name come from?

Hooker Creek and Hooker Gulch may have been named after someone with the last name of Hooker. Or it could be something far more interesting. So far, I have been unsuccessful in determining the origin of the name.

What was Hooker Gulch used for?

My research took me offline and into an interesting book I purchased a year or two ago: Santa Cruz Trains, by Derek R. Whaley. Derek traces the history of the Santa Cruz Mountains via the railroad expansion and demise, and he’s investigated local place names and background as part of the book. 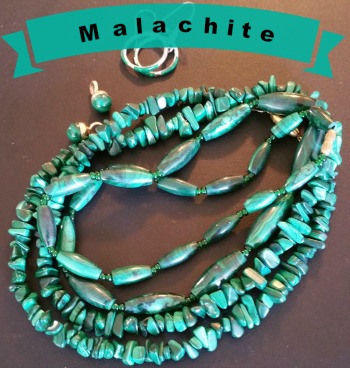 From Derek’s book, I learned that Hooker Gulch was a mining area. It began when copper was discovered there, and drilling began in 1917.  “The miners discovered chalcopyrite, azurite, and malachite, much of it rich in copper” according to Santa Cruz Trains. After a change of ownership, in 1929  the efforts began again and eventually, between 1936 and 1938, gold was found. Silver was also mined, but the main thing taken from the hills over Hooker Gulch was copper. A nearby road is Old Gold Mine Road, just off Aldercroft Heights Road. The gold extraction project was shut down in 1952 and the tunnels no longer exist. Apparently, gold was the most lucrative payoff from the drilling efforts.

Several websites put the location of the Hooker Creek Mine up on the hills north of the valley, just east of the Lexington Hills area (off Weaver Road) rather than in Hooker Gulch, at the bottom of the valley.

In 2013, the city of San Jose published a document on surface water quality, and the Hooker Creek area was mentioned as a location to test in case copper from the mine was making its way into the creek (and then into the Los Gatos Creek and Guadalupe River as they are part of the Guadalupe Watershed). I don’t know if this has been pursued or not.

As with much of the Los Gatos Mountains, the land was also logged, per the book.

The Los Gatos Creek (which feeds into the Guadalupe River) and the tributaries leading into it, such as Hooker Creek, were once full of rainbow trout, also known as steelhead trout. In recent decades, there have been conservation efforts to reintroduce this native species to the area. If you would like to read about the studies, please see this study: Historical Distribution and Current Status of Steelhead/Rainbow Trout (Oncorhynchus mykiss) in Streams of the San Francisco Estuary, California.

What is Hooker Gulch used for today?

I studied the county records via the Realist Report (accessed though the multiple listing service) and it looks like there’s one residence in the valley’s base, and otherwise the land is owned by San Jose Water Works close to the creek. Near the top, east of or in the Lexington Hills, where it looks like the mine had its base camp, there are many residences and some land is owned by the Mid-Peninsula Open Space Preserve.

If you are reading this and know more of the area’s history, I’d love to hear it! There are layers and layers of history in the Los Gatos or Santa Cruz Mountains, and I’m just scratching the surface here. I can only imagine that there are many more stories for all the similarly odd and interesting sounding place names.