Interior floods in the home

Most of the time, when we think of floods, we imagine a natural disaster, and that the people impacted live in a 100 year flood plain.  On the east coast, basements are the part of the home usually impacted by floods.  Interior floods in the home can happen to anyone with plumbing, though. Today I want to share what happened to us in mid December 2012 and hope it can help others to avoid our experience.

A few years back we had a large amount of water intrusion due to a refrigerator water line that broke. One surprise lead to another.

First, the apparent cause may have been a different plumbing issue: dissimilar metals, copper and galvanized steel, not properly separated. It was on one of the to-do lists that just didn’t get done fast enough. We see things like that on home inspection reports and don’t always understand the risks.

I first discovered the water on December 9th, 2012, when I noticed that our dining room’s carpeting didn’t look quite right – and found it damp.  My initial thought was that our elderly dog had had an accident, but there was far too much liquid and it all seemed to be up against the wall backing to the kitchen, so it didn’t take long to realize that the pooch was not to blame.

The first job was finding what was wet so that it could be dried out ASAP, before mold got a foothold. The dining room was carpeted, so it was easy to simply pull the carpet back and check the underlayment.  (In this image, the kitchen is to the left, and the pantry and half bath are behind the wall straight ahead.) I  had a lot of calls to make to flood remediation companies, to our insurance company, etc. I was concerned about mold as I’d taken a 3 hour class in that subject at a real estate conference, so I wanted the leak stopped and the water removed immediately. 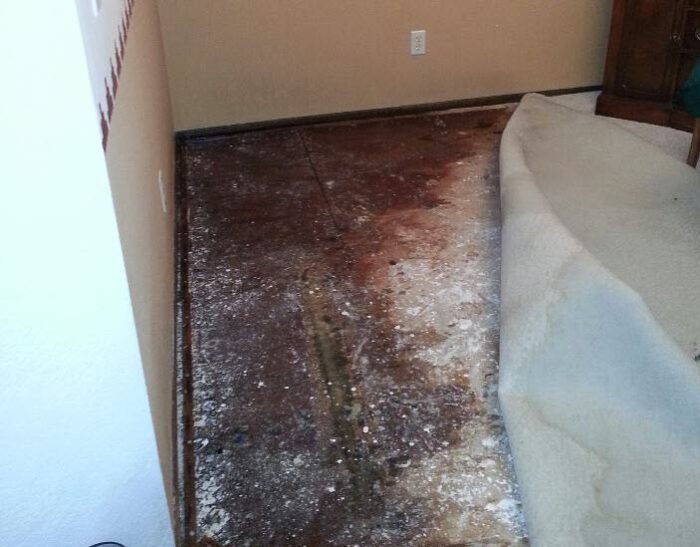 The dining room at my house, which backs to the kitchen wall where the refrigerator water line leaked. The damage was not fully apparent until the carpet was pulled back.

Back to that first task of figuring out what was wet – the dining room was easy due to carpet. The kitchen and other nearby areas were a different story.

The flood brings an unhappy surprise

Our house was built in 1977, one year before lead paint and asbestos were banned in construction of homes, so the contractors needed to test the floor before removing it. We had a layer of newer Formica flooring on top, but underneath was the original dark brown vinyl, and unhappily, asbestos was present. This extended from the nook and kitchen into the laundry room, pantry, and half bath.

The job grew exponentially as our home then required that a hazardous material crew come in to remove the stuff from a significant portion of the house. (The bell wreath is a reminder that this was about 10 days before Christmas.) Our kitchen and that part of the house became off limits until the asbestos remediation was complete. 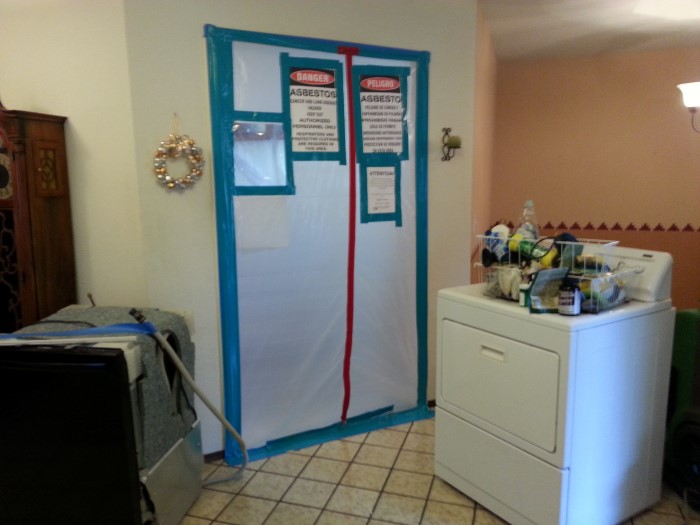 The foyer got to house the washer, dryer and fridge for awhile

(Please pardon the blurry photo below, it was taken through the sheet plastic “window” the crew provided.) 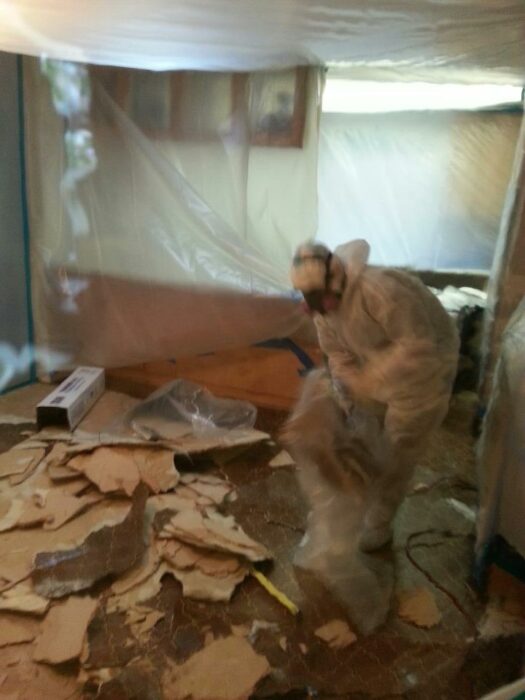 Our breakfast nook’s floor getting demolished by the haz mat crew – view through a sheet plastic window.

The dining room was not the only flooded area, though it was the area with the most water. The water was of course in the kitchen, and also in our pantry (which  is in the laundry room). 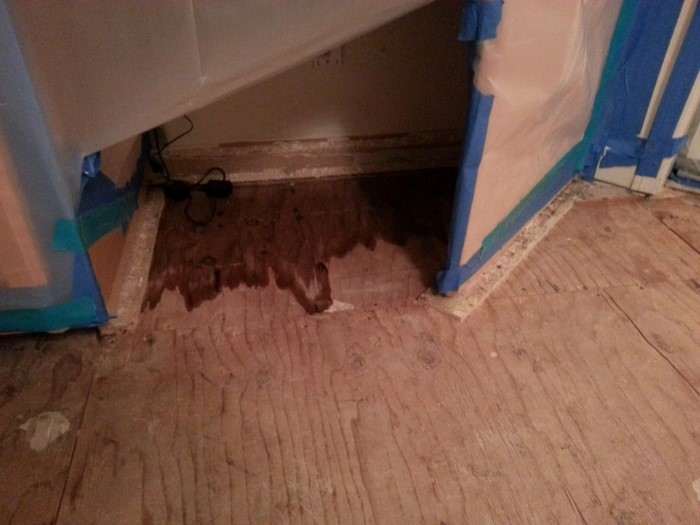 The kitchen “desk” was flooded also.

And the pantry, which backs to the same wall as where the fridge is located (in the laundry room). 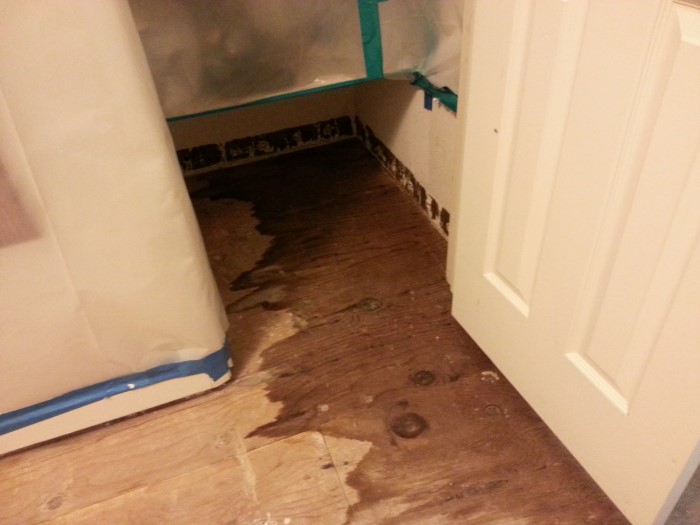 The pantry also got flooded

Once the flooring was removed and the wet areas identified, it was time to dry it all out.

But wait, another surprise! The uncovered area also revealed that the dishwasher was leaking – there were no signs of it prior to the floor being gone. 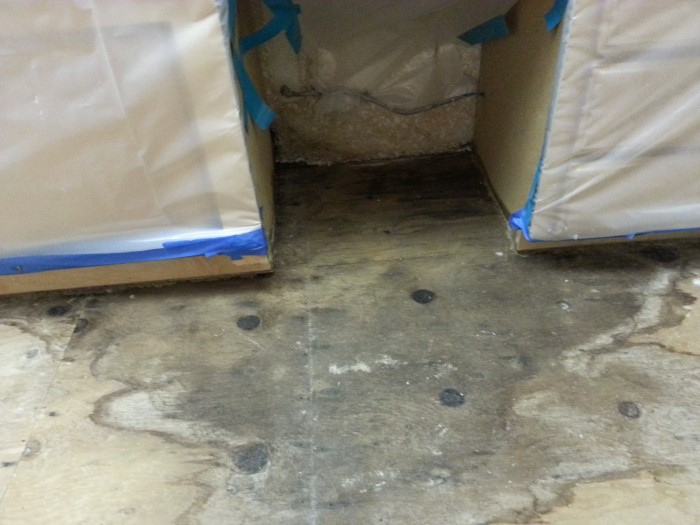 The fun just never stopped that month: the dishwasher was also leaking and needed replacement

Next, drilling holes in the walls and setting up fans. Noisy fans. For several days. (Silver lining: the cabinets were dried out from behind and did not have to be removed.) 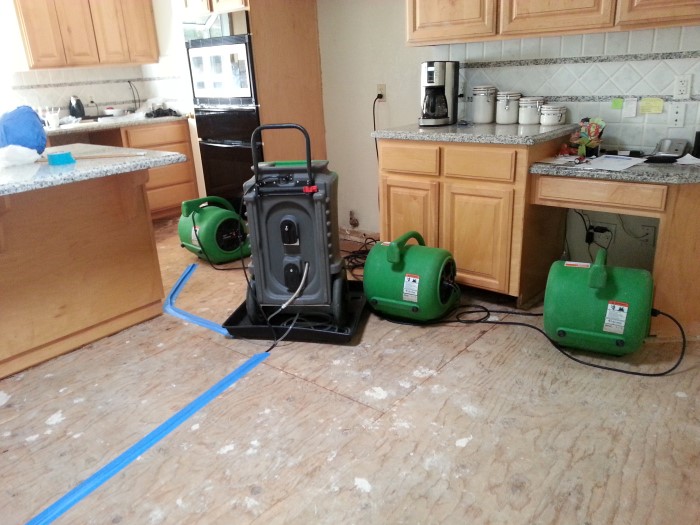 The next two weeks following this discovery were not a lot of fun and involved a parade of tradespeople to find and stop the leak, then remediation work to remove and dry out impacted areas, then reinstalling what was removed plus drywall repairs, installing new baseboard to cover up the holes put into the walls, and some touch up paint, too. Naturally this included seeing an insurance adjuster, who was quite pleasant to work with and told us upfront what to expect.

Our insurance did cover much of the work, including surprises such as asbestos in the vinyl flooring under the floor we installed over it in 2000. But naturally it doesn’t cover everything, and we upgraded some carpeting which had been on the “to do list” but we hadn’t planned to do just yet. Plus buying a new dishwasher.

In the case of our water line flood, the moisture appeared quickly and suddenly a lot of things got turned upside down.  But leaks can also begin slowly, sight unseen (as with our dishwasher) until there’s significant damage such as dry rot.  Our insurance adjuster (from Allstate) told us that he’d had claims come in where toilets literally fell through the floor due to extreme dry rot caused over time.  In those cases, the dry rot would have been present for many years, though it appeared out of nowhere to the home owners.  They had no idea that a leak was at work.

What can cause interior floods in the home?

Interior floods in the home not due to weather can be caused by a number of things.  Here’s a short list of some of the main culprits that start within the domicile:

I wouldn’t wish those weeks of remediation that we had on anyone. I’m hoping the info below will prevent someone else from going through what we went through.

What can be done to prevent an interior floods in the home from happening?

Here are some suggestions I found while researching this question on how to prevent interior floods in the home:

There are certainly many other areas to check, and this is not an exhaustive list by any means.  We didn’t even touch on the roof, downspouts, grading, or external conditions than can cause flooding.  These are all important too, but they are probably better known and appreciated than the interior causes of flooding which we just experienced.

We were lucky as our leak involved clear, pure water.  If a toilet or sewer backs up it’s considered black or gray water, and it gets far more complicated since then you’ve also got a bio-hazard.  We were also lucky in that we caught it early and began the repairs quickly, before mold became an issue.

Is there anything else that can be done to minimize water damage?  After this experience, and watching the flood remediation people at work, I wanted to add one more thing to our arsenal for prevention: I asked Jim to give me a pin less moisture meter for Christmas.  He very kindly complied and I’m happy to have it and intend to spot check for leaks on a regular basis. (The one we have is made by Ryobi and costs about $50.)

Prevention is a lot easier, and more affordable, than remediation.  When creating your annual home maintenance “to do list”, be sure to include checking for signs of leaks around the home and make sure your water supply lines don’t directly connect galvanized to copper pipes.

Resources related to interior floods in the home:

For the water remediation, we used and were very happy with Servpro of Campbell. Servpro is a franchise, and the offices are not all the same (we called one other nearby Servpro office and were unimpressed). They literally specialize in interior floods in the home.

Where are the natural hazards in Los Gatos? (flood, fire, landslide, earthquake faults)