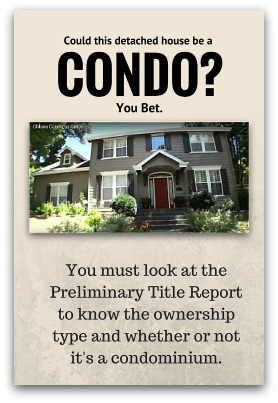 Real estate ownership type and architectural styles of homes are not necessarily connected, and this confuses a lot of Los Gatos home buyers.    We tend to think of condos as apartments that people own, for instance.  It’s not that simple.

With condominium ownership, you own the inside of your unit plus a share or percentage of all the common areas (think private roads, pool, etc.). With a condo you do not personally own the land under your unit.  This can come in the form of what looks like an apartment (with other units above, below, on the sides or perhaps back-to-back), a townhouse (think “row house”), at attached home (duet), or even a free standing, detached house.  Any of those can be a condo in the ownership sense.

If you look at a home, how can you tell the typs of ownership?  You cannot do it.  You must look at the Preliminary Title Report to know the ownership type and whether or not it’s a condo.

If you read a preliminary title report, it may say something like this, reflecting a share of ownership of the common areas:

1. THE ESTATE OR INTEREST IN THE LAND HEREINAFTER DESCRIBED OR REFERRED TO COVERED BY THIS REPORT IS:
A CONDOMINIUM, as defined in Sections 783 and 4125 of the California Civil Code, in fee

If it is instead it’s another type of ownership in which the property owner does own both the structure and the land beneath it, the preliminary title report will say something like this:

1. THE ESTATE OR INTEREST IN THE LAND HEREINAFTER DESCRIBED OR REFERRED TO COVERED BY THIS REPORT IS: A FEE as to Parcel(s) One; AN EASEMENT more fully described below as to Parcel(s) Two  (the easement only if applicable, as with a townhouse community)

There are many reasons why it does matter which type of ownership you have.

Let’s say you have a house that’s in condo ownership and you want to add on into the back yard.  It might be a little more complicated if you do not own that land to begin with!  In some lending situations, it can matter also.

How often do we run into houses that are condos?  Not too frequently, but if you have ever admired the pretty houses on Ohlone Court over by Vasona Lake County Park, you’ve seen some!  In Almaden, there’s a beatuful gated community called the Villas of Almaden – same thing: houses are condos.

What Is the Difference Between CID Ownership in a Condo, Townhouse or PUD?

What Is A Plat Map, And What Can You Learn From It?