Kennedy Meadows and Kennedy Estates are adjoining upscale residential neighborhoods in east Los Gatos, both along Kennedy Road and just a little further from the downtown area than the Surrey Farm subdivision. Below, please find the approximate boundaries that I mapped out. 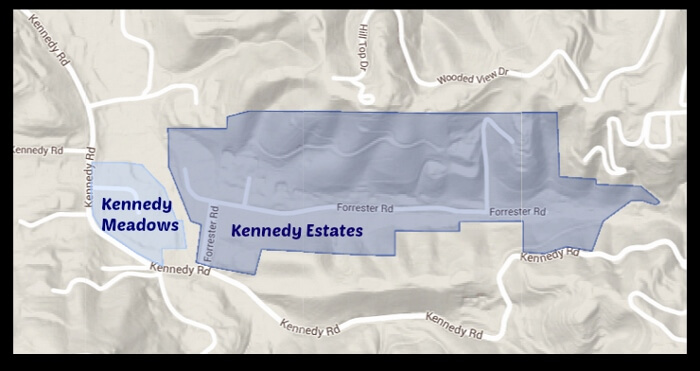 Kennedy Meadows is a small subdivision on Kennedy Court. It consists 10 of homes built between 1995 and 1997. The average lot size is just under a half acre, and the average home size is  about 4000 SF. This is a very scenic area as the hills are nearby. Properties there sell upwards of $3 million, often $4 million (if not much, much more). 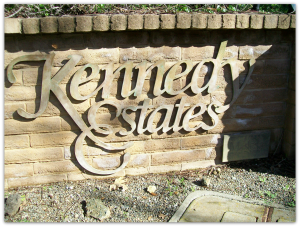 Kennedy Estates consists about two dozen large, estate quality homes primarily along Forrester Road or just off of it on Leotar Court. Most of the houses are 2 story and were built in the 1980s or 1990s, but a few are newer or older than that. There’s a broad range of home size, from 3500 SF to over 8,000 SF, but the majority of houses are between 4,000 SF and 6,000 SF. Most lots are 1-2 acres, and most are hillside (as Forrester runs at the bottom of a little valley). Because it’s a small valley, this area can get quite toasty in summer, as few of the coastal breezes make it through. These luxury properties all enjoy central air conditioning, of course. If you want to live in Kennedy Estates, you’ll probably need to budget $4 million or more to purchase a house there.

Much of Forrester Road is in a little valley

One of the lovely homes in Kennedy Estates

A home on Kennedy Court, which is in the Kennedy Meadows subdivision in Los Gatos

Why are Kennedy Meadows and Kennedy Estates in east Los Gatos neighborhoods so popular?

First, of course, they are not far from “town” and they enjoy the highly regarded Los Gatos Union School District and the Los Gatos Saratotga Joint Union High School District. Next, it’s a beautiful area, both in terms of the natural beauty of the hills and trees but also architecturally. It is very appealling. Finally, both areas enjoy (fairly) newer homes, lack of power lines, and quiet areas generally – unless backing directly to Kennedy Road.

What are the concerns in Kennedy Meadows and Kennedy Estates?

Kennedy Meadows: This is a low lying area near the origins of Ross Creek, and before this land was built out, it used to be pretty marshy in winter as it was the bottom of a hilly area.

Kennedy Estates: much of this area is in a little valley (the part further from Kennedy Meadows), and in summer the cool coastal breezes may have trouble reaching those areas due to the protection from the hills. It can get warmer than areas which are more out in the open.

Both areas may be in natural hazard zones for earthquake faults, unstable soils / landslides, etc. – check the natural hazard report as these mapped areas can change. There’s no shortage of wildlife in these neighborhoods. Additionally, this is a high wildland fire risk area.

For “close to town” with an “out in the country” feel, this luxury home area cannot be beat. If there are any homes available on our local MLS, they should be displayed below. Please let me know if you are interested in buying or selling a home in Kennedy Meadows or Kennedy Estates. I’d love to chat with you about it!