Listing Agreement, Purchase Agreement Forms: Consumers, You May Have a Choice in Silicon Valley 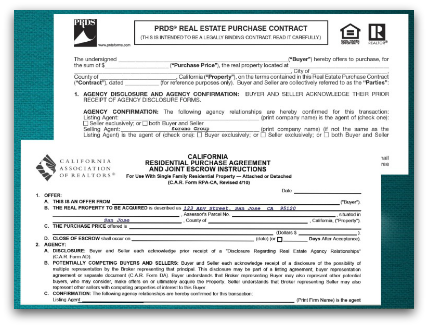 Most consumers don’t realize that there are two sets of real estate forms used by Realtors and other real estate professionals in Silicon Valley and nearby areas. The California Association of Realtors provides the paperwork found throughout most of the state (“CAR forms”). The Peninsula Regional Data Service authors a more local set (“PRDS forms”); these are seen from Los Gatos, Saratoga and Cupertino up through the Peninsula to just south of San Francisco. The logo of one or the other will be displayed so you’ll know which one you’re looking at. By the way, real estate brokerages often have their own paperwork too, whether it’s a final walk through form, an explanation about something such as arbitration, disclosures they don’t believe are adequately covered elsewhere (such as one regarding parking and storage for use with condominium and townhouse purchases).

Did you realize that the CAR and PRDS contracts, addenda, disclosures and forms are a little different from each other, and each provides different protections and “teeth”?

Here are a couple of the key differences within the purchase agreement between buyer and seller:

There are pros and cons to each of these sets and individual forms. When you go to list, sell, or purchase a home, be sure to discuss the plusses and minuses of each with your agent. One set is not 100% better for you as a buyer or a seller. There are clauses in each, though, which may protect your interests best.

One caveat: if you are buying a bank owned home, it is very likely that the bank will require you to use the CAR form. They cannot get up to speed on regional contracts and they will insist on the “as is” nature of the CAR form (PRDS can also be “as is” if a box for that is selected). Some banks may use their own forms, or send back an extremely lengthy addendum that may cancel out half the clauses in whichever purchase agreement you use. Don’t be afraid to seek out a good real estate attorney if that is the case. Realtors and other real estate salespeople are not attorneys and this would be an ideal time to call in professional legal help.

If you are purchasing a property from a relocation company that works nationwide and has done a buyout of the former seller, you may be required to use their forms If you are buying new construction, the builder may require that you use their forms. In both of these cases, whom do you think the paperwork will favor? Many home buyers think that all of these contracts are the same so it doesn’t matter – but a close look and you will find differences that do matter! If asked to use a builder or relo contract, please have your attorney review it before you sign!

Something else to consider is that you may be able to use some paperwork of each set. CAR has a myriad of forms for realty transactions, many more than PRDS does. We are allowed to use some of each, so don’t believe that if you start with one set you cannot use something from the other – at times picking and choosing may make the most sense!

Finally, some listing agents will require one or the other contract. (The sellers don’t always know the differences so may not weigh in on it at all.) In some cases, the contract demanded is the one which the listing agent knows best (and doesn’t want to be surprised by clauses unfamiliar in the other set). Most of the time, though, what the listing agents really want is an As Is sale for their sellers, so if that is the case, they may not really mind which set is presented, as long as the As Is check box is marked. It’s always good to ask if there’s something in that contract that they’re really after.

Buying and selling real estate in Los Gatos, Monte Sereno, Saratoga, and San Jose does involve a lot of options and decision making. This is another element to consider because just like all the other choices you face in home buying or selling in Santa Clara County, the choice you make on the forms you’ll use may impact your outcome. Hire a good agent who works with both sets, can explain the pros and cons of each in terms of your position, and is not dependent on just one of them alone.

One last aside: although Professional Publishing is apparently a main provider of similar forms, I have never run into one in my career (began in 1993).