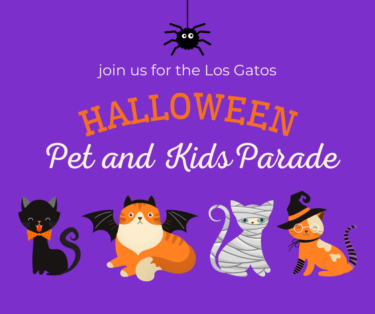 Celebrate the season in style with the Los Gatos Halloween Pet and Kids Parade! It’s so nice to have a pet and children parade back!

Details on the Los Gatos Halloween Pet and Kids Parade

Come in costume and bring the whole family. Many downtown merchants will be participating in handing out treats to the costumed visitors participating.

The cost is $10 per family or $5 per individual, and the recipient of funds raised will be The Street Dog Coalition.

Years ago, we had a fun dog costume parade in Los Gatos each October called the Howling Halloween Pet Parade. The proceeds used to go to the Los Gatos Monte Sereno Police Department’s K9 unit – a wonderful cause. That event was hosted by Society Dog, a pet supply company that closed several years ago.

You can learn more about the Los Gatos Halloween Pet and Kids Parade and buy tickets at their EventBrite page.