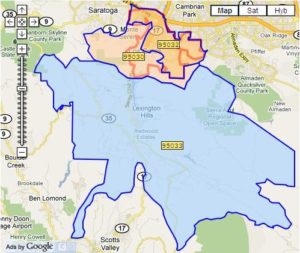 Los Gatos Zip Code commentary:  A few years back, the post office reorganized the way that 95030 and 95032 split up most of the 9 or 10 square miles which comprise the “town of Los Gatos”. It used to be an east-west divide, and now it’s closer to a north and south split, but not exactly that either.

I love this map because it looks as odd as the new distribution feels!  The 95033 zip code is unincorporated, mostly in Santa Clara County, but as you can see, much of it falls west of highway 35 (Skyline Blvd) and is in Santa Cruz County.  When a home has the 95033 zip code, it is analogous to the property being “in the mountains”.

(2) There are some funky pockets near the town’s borders where the homes may actually belong to Los Gatos but have a zip code of the neighboring community or vice versa – this is rare, but it happens. A patch of Campbell near Pollard and Quito has a Los Gatos 95032 mailing address, but it’s actually Campbell.  Another pocket of Los Gatos near National and Carlton has a mailing address of San Jose 95124, but it’s actually part of the town of Los Gatos.  Weird, but true.