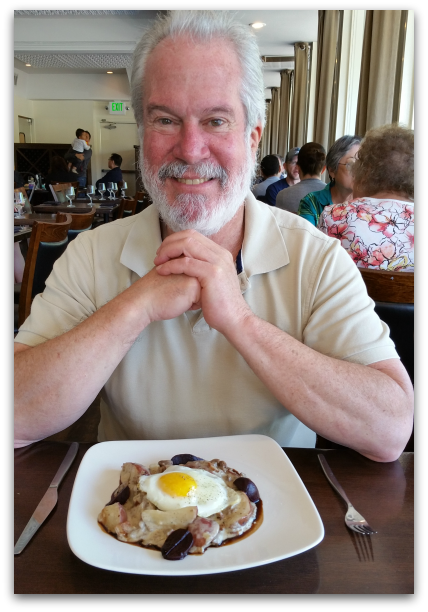 Hult’s has been mailing out 2 for 1 lunch coupons and a few days ago, my husband and I decided to indulge.  The food, service, and environment were all great, so I wanted to give a little plug here.

We went on a Saturday in the very late morning, around 11:45.  The restaurant had some patrons but it was early and uncrowded, and we were seated immediately.

The menu is anything but typical, and Jim and I both saw things we’d never heard of before.  He  ordered the Swedish Classic Pyttipanna, shown in the photo to the right.   I will admit that this wasn’t visually appealling to me, as it was mostly shades of brown except for the fried egg on top and some beets on the side, but Jim said that it was delicious and didn’t leave a scrap behind.

As for me, I wanted to try the Lime Stuffed Pan Roasted Salmon(see photo below). My dish featured asapagus tips, melted leaks (I’d never heard of them served as melted before – it was a delicious leek mush) and trout caviar.   Usually I don’t go out of my way to have caviar, but it was quite tasty and also gave the food a very nice splash of color. 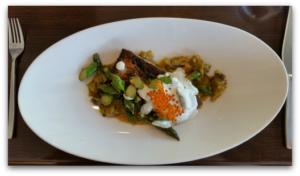 It was too early for us to have wine with our meal, but I need to note that the Hult’s wine menu is quite extensive and that alone might be a reason to return.

The service was excellent.  The atmosphere was quite pleasant.  On the ceiling there were sound absorbing tiles that did a wonderful job of keeping the ambiant noise low.   The food could not have been better.   Prices were not low, but few places in Los Gatos will be described as affordable – and the quality is certainly there.  For cost conscious consumers like me, the coupon was just the ticket to try the restaurant.  I’m sure we’ll be back – with or without a coupon.

*As always, this review is done only because I enjoyed the establishment.  The good folks who run Hult’s did not know that I was going, nor that I would write a favorable review, and no compensation was made or received for this or any other review on this site.