Where are the natural hazards in Los Gatos?

People relocating here often ask about the natural hazard zones in our area, such as:

Quick resources to get you started

There are two quick and high level resources to help with a basic understanding of where these zones are.
First, the Los Gatos General Plan 2040 has a lot of good info online. It’s a PDF, so not interactive, but it is a great starting point in getting to know the natural hazards in Los Gatos.

Second, the Cal OES My Hazards Awareness site, which I discuss below, is an interactive website with clear imagery that provides a high level sense of where the various hazard zones may be.

Resources to learn about the Natural Hazards in Los Gatos

There are many good and interactive websites with detailed information and after getting a broad feeling from the general plan, this is my preferred next step.

A great interactive resource for seeing several of the zones at once is the California Office of Emergency Management My Hazards Awareness website. The visuals are pretty good overall, but if you click on what appears to be the San Andreas Earthquake Fault, the map doesn’t provide additional information, unfortunately. As a starting point in a consumer’s research, though, it’s extremely useful. 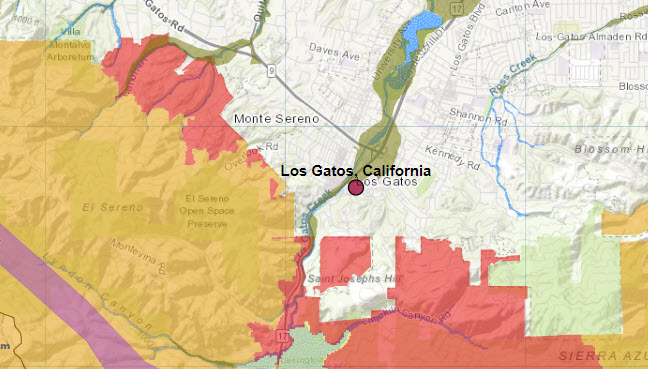 The CAL OES My Hazards Awareness website, screenshot pictured above, covers the state mapped natural hazard zones, but not the local (county or city or town areas). Also it does not cover flooding from dam failure or levee breaches,  as dams and levees bursting is considered a man made hazard, not a natural one. The CAL My Hazards site does include earthquake faults, liquefaction zone, the high fire risks in the state responsibility areas (not the local responsibility areas),  100 year flood plains, landslide areas, etc.

Important: The fire zone does not appear to be updated on the CAL My Hazards site. The best map for understand the high fire hazard severity zones and similar areas is using the CAL Fire site, FHSZ Viewer (Fire Hazard Severity Zone Viewer).

The natural hazards in town do go beyond what shows on this website, as we also have locally mapped earthquake faults, such as the Shannon – Monta Vista Fault, and also local responsibility area fire zones.

Getting the county mapped or locally mapped fault info is a not too hard (the local fire zones are more challenging to uncover).

Thankfully, the U.S.G.S. has maps covering not just the most recently active, state reported faults, but also some of the older ones which are listed by counties or cities / towns. Please visit the U.S. Quaternary Faults map to view all of the details. You’ll need to zoom in a number of times. Fascinating info. 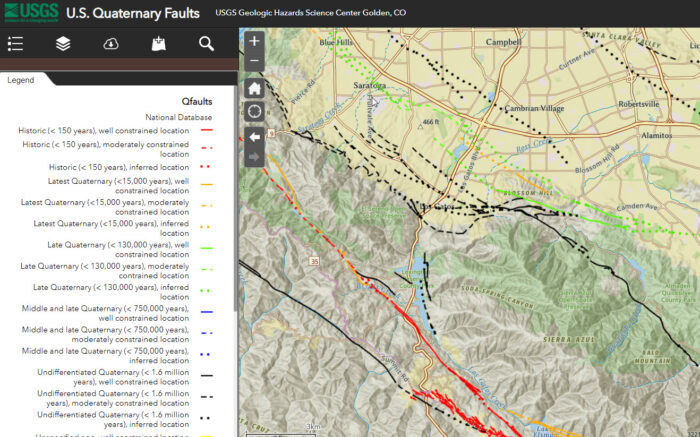 Finding the map for the local area of responsibility has been more tricky and what I’ve found appears to be incomplete, but I’ll share what I have so far.

I been in touch with a few people from the Santa Clara County Fire Department to try to get ahold of the local fire hazard maps (not the state one). The folks there are all super helpful and extremely willing to help, but primarily they seem to rely on the state’s map or an internal database which is not published for the public. Our natural hazard report providers, though, state that many areas of Los Gatos are in various types of fire hazard zones and that the maps for them are found with local fire authorities.

What we did find is the 2020 DRAFT of the Los Gatos Ad Hoc Wildfire Committee Report, which I’m posting below. The key was pretty hard to read, so I enlarged and re-added it. Much of the town appears to be in the “State Mandated Pre-Zone (VHFHA)” VHFHA appears to mean Very High Fire Hazard Area. It is a draft and it’s a couple of years old, so it could change.  There is another map, a little similar,  the Los Gatos Wildland Urban Interface Fire Area, often referred to as WUI, pronounced “Woo-EEE”. Here’s another link to the WUI map, which appears to cover a slightly smaller area. 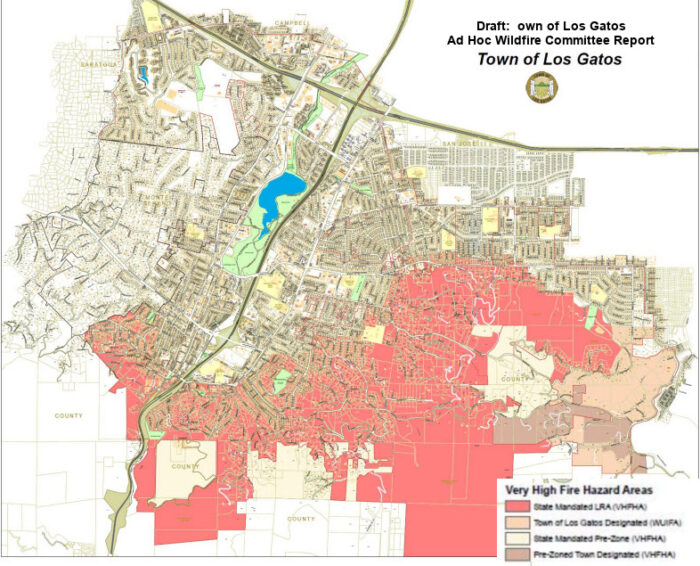 The Santa Clara County Planning Office has a number of maps. Some have to do with protected species, such as the valley oak or blue oak groves or the  habitat for the burrowing owl.

One is the geohazards map. This site may be used to check liquefaction zones, fault rupture zones, landslide zones, and many other state mapped natural or geological hazard areas. I’ll provide a few images with that same link below, but if you visit that website you can select or unselect a number of data points, as you can see on the left side of the screenshot below. 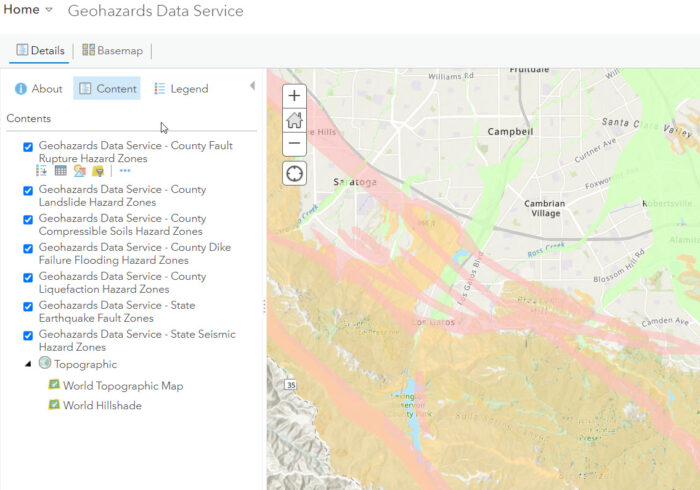 I’m adding links and maps to several of the zones, but the default for the view is to show ALL zones together. To get a clearer picture of just the zone you want to know more about, please deselect all but the one item you want to view more clearly.

The fault rupture hazard zones in Los Gatos are seen here in pink. 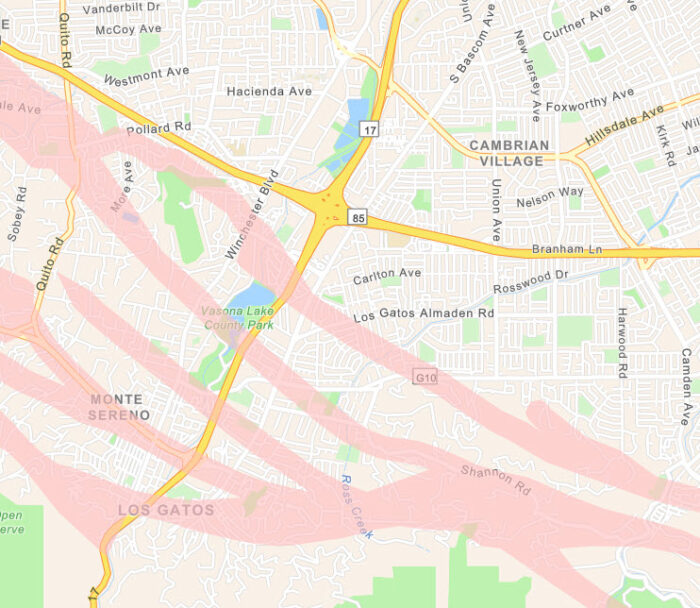 Liquefaction Zones in Los Gatos mostly follow the creeks (there are many parts of San Jose and other cities in the county which are in liquefaction zones that are not near rivers or creeks). 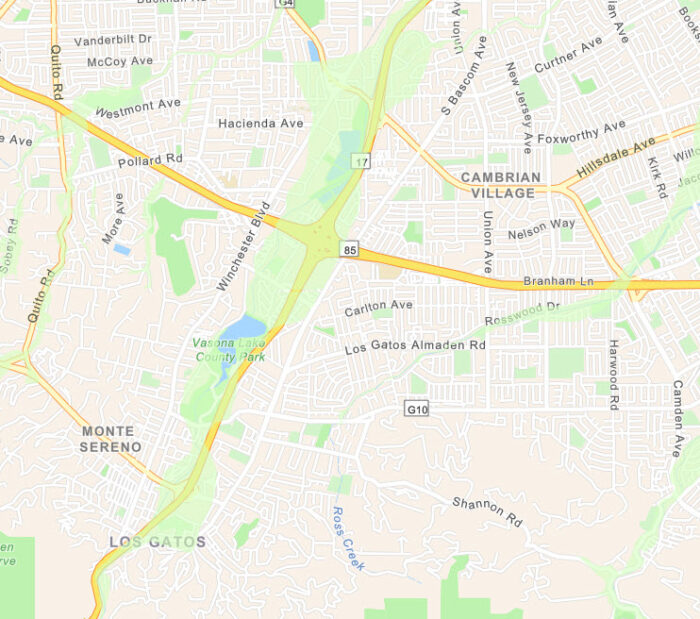 Radon is not talked about much here, but Santa Clara County is a “moderate” radon risk area (not high). The California Department of Conservation has an indoor radon potential map, but it is mostly covering the mountains rather than the valley floor – I presume that’s because radon comes from rocks and there are large concentrations of them in the mountains. The map is interactive, and if you click on the various colors in the Santa Cruz Mountains you’ll see the rating for radon. Red is the highest risk.

Also, some may contend that radon is not much of a natural hazard since it’s only a problem when we build houses (especially houses with basements) on them.  It’s apparently the 2nd leading cause of lung cancer in the U.S., so no matter how it’s categorized, it’s worth being the subject of consideration. 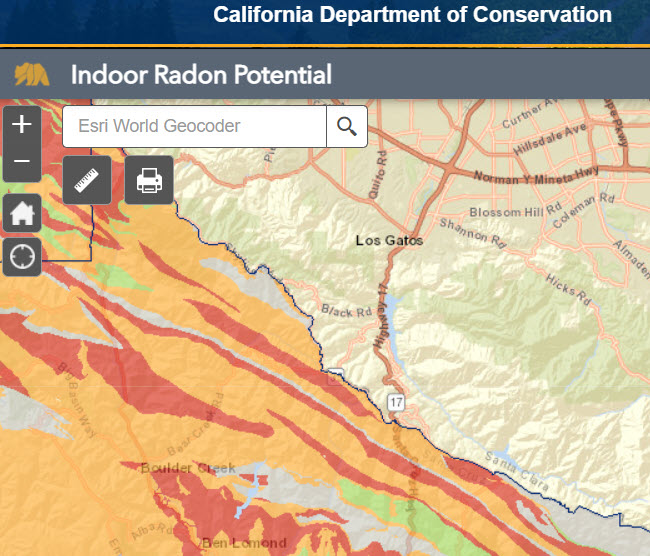 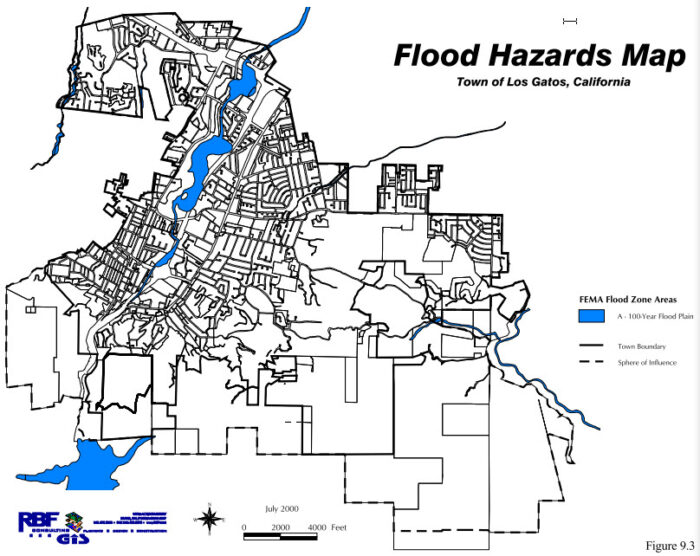 Also, there are loads of good resources to learn more about radon on the website for the California Department of Health.

Caveat: the mapped areas for various zones can and often do change over time

It is important to understand that these “natural or geologic hazard” zones in Silicon Valley are not necessarily static.

Natural hazards in Los Gatos – and other hazards, too

Not every hazard is a natural hazard. As mentioned above, flooding from dam or dike failure is not considered a natural hazard since levees and dams are human-made. Further, there are other environmental concerns such as those relating to contamination, the worst being the Superfund sites. Happily, we don’t have any Superfund sites in or near Los Gatos, but there are many of them in Sunnyvale, Santa Clara, and spread around the valley. We have had leaking underground storage tanks (think older gas stations, dry cleaners, and school yards where mechanical equipment is stored), and those happen throughout the county, too.

Some rural parts of Los Gatos may have old, abandoned mercury mines. They are unmapped, generally. The natural hazard disclosure companies mention only that they exist, not where they are located since those sites were not all mapped.

Another hazard that isn’t spoken of much is that from pollution and the health risks from living close to busy roads and freeways. The EPA has a publication that summarizes many of the main points well: Near Roadway Air Pollution and Health: Frequently Asked Questions

We’ve had clients ask about the risks of everything from being near high voltage wires to crematoriums and tall trees! (And yes, the Los Gatos Memorial Park does do cremations. I have no info on air quality from those events.)

Almost everywhere in town and in Silicon Valley has some sort of risk, whether natural or environmental. We are all close to the San Andreas and Hayward faults as well as many other earthquake faults (not all of which even have names). Probably half of Santa Clara County is in a liquefaction zone. Being near the hills generally means more fire or earthquake risk. If you study the flooding from dam failure, you may find that a large portion of the South Bay is in that zone, too.