Please continue reading for much more information on the neighborhood!

There are 3 distinct subdivisions in this broader neighborhood: Rio Rinconada, Saratoga Highlands, and a pocket with bigger homes and lots that we will call the Granada Way area. 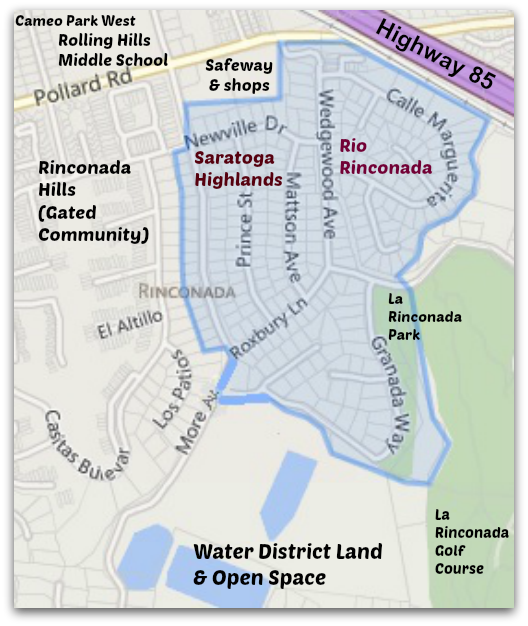 The smallest and most affordable part of the neighborhood, generally, is the Rio Rinconada subdivision, with 84 homes. (Recently there have been some new houses built as well near the intersection of Wedgewood and Calle Marguerita.) These houses were originally constructed between 1961 and 1963.

Here the streets all begin with “Calle”: Calle Marguerita, Calle Lolita, Calle Estoria, Calle El Padre. Rio Rinconada means River Corner, and apparently this name was given since the neighborhood runs alongside of Smith Creek. Houses here are as small as 1080 square feet, though most are a bit bigger and many have been enlarged from their original size. The smallest lot in Rio Rinconada is a bit shy of 7500 square feet. Many are close to 8000 SF but a few are more than 10,000.

A little further west, Saratoga Highlands is a subdivision of 120 houses including More Avenue, Prince Street, Mattson Avenue, Newville Drive, Roxubury Lane, and the adjacent parts of Wedgewood Avenue. These houses vary in size also, but overall tend to be a little larger than Rio Rinconada.

Along More Avenue, which is a divided road situated on a hill, most houses are split level, which makes a lot of sense with the terrain.

What does it cost to live in Saratoga Highlands?

There are a few factors at play here on pricing- not just home and lot size, but also views, as some properties toward the top of the hill have lovely valley views, while other homes further down may not. Prices vary a lot, but most homes in this area usually sell between about $1,200,000 to about $1,700.000 for the very largest properties. In the current market (as of October 2016), things are going a little higher than usual, and over the last six months two homes have sold in Saratoga Highlands at $1,320,000 and $1,725,000.

Adjacent to La Rinconada Park are Granada Way, Las Uvas Court, and higher up the hill, Capistrano Place. These streets generally have lovely views of either the park, the open space, the hills or the valley. Here you will find some homes with three car garages, larger square footage (2500 SF to under 4000 SF) and lots up to about a half acre. They are truly lovely homes and come with noticeably higher price tags for that reason. (I studied the plat maps for this section but could not find a subdivision name for them. As far as I can tell, there’s no particular name for this cluster of homes, but most of them are more contemporary in style and were built by “Thrust 4”, a builder also active in Cupertino during the same period when these homes were built.

These three areas are contiguous and form a larger neighborhood centered on the proximity of the park, Rolling Hills Middle School and the shops found nearby on Pollard at More, including a renovated Safeway. They all enjoy a tremendous amount of open space nearby – a combination of the La Rinconada Golf Course, La Rinconada Park, and the water district’s land at the top of the hill.

Houses here are younger, most being built between 1973 and 1983, though one built later and one completely or nearly completely rebuilt very recently.

La Rinconada Park can be found at the corner of Wedgewood and Granada. It is a large park, spanning both sides of Smith Creek, and it includes tennis courts, a playground, a half mile walking path next to the creek and a large expanse of lawn. You can view a map of the park on the town’s website – here’s a link to the pdf of it:

The town recently revamped its website and now has only minimal information that I could find on La Rinconada Park, but here’s the page: http://www.losgatosca.gov/905/La-Rinconada-Park 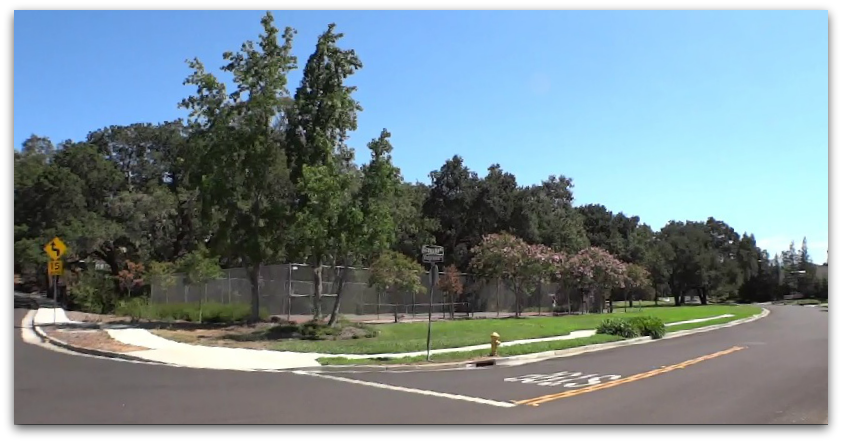 The land here rises from close to Pollard Road, where it is level, up to the hill where the reservoirs sit. I’ve touched on the fact that this area of Los Gatos is more walkable than most – it’s easy to get to the grocery store or other shops, a big park, or Rolling Hills Middle School. (Some may also find it easy enough to go on foot to Marshall Lane Elementary School.) The abundant nearby open space is a huge plus generally. And as you visit the neighborhood, in most areas the streets are not clogged with cars, so the feeling is generally nicer.

There are some negatives, as there are everywhere. As you’ll notice on the map, Highway 85 is not too far away. What you cannot tell as easily is that the train tracks and high voltage lines are right there with the freeway also. For most people, it’s not ideal to live so close to those things. Part of Rio Rinconada backs up to them, and that will bring prices down. (On the upside, it makes part of this lovely area more affordable.)

Being near or on a hill can require more drainage work than would be necessary on land away from the hills. Many homes have some sort of work for water mitigation done – it could be a sump pump or two, French drains around the outside of the house, vapor barriers in the crawl space or other approaches to getting the water away from the house. If extensive drainage work is needed, it can be really costly. (Recently some clients of mine got a bid of over $50,000 to address water issues on a hillside lot in Almaden.)

All of that open space provides habitat for wildlife: deer, coyotes, bobcats, mountain lions, rattlesnakes, hawks, turkey vultures and much more. In general, it is a joy to have the open space, but it is important to be aware of the need to keep pets and small children safe from predators, which are occasionally seen in the area. And it’s probably wise to understand what the deer will want to sample from your garden and to landscape accordingly.

Anytime there is a hill with a road on it, there’s the risk of people accidentally speeding as it’s very easy to have gravity pick up the pace and not notice. More Avenue is divided in the Saratoga Highlands section, which I believe makes it a bit safer, but that also means that if you live there you will need to overshoot your house and make a U-Turn to get to your property.

Sorry, but we couldn't find any results in the MLS that match the specified search criteria.