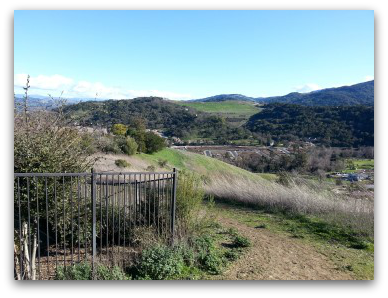 These photos date back almost two years, to January 2013 (a dry, pleasant winter day!) so views of the housing that was going in then will be quite different looking now.

On the right: in the distance, see the Guadalupe Landfill, also known simply as “the dump” locally, which is accessed off of Guadalupe Mines Road. Below it , see the Brookside Development in Almaden (with Los Gatos schools) getting ready for building. Those homes are in now – at least many are!

Same photo – The Shannon Valley Ranch neighborhood is off to the right, in Los Gatos at the far eastern edge. The dividing line between Almaden and Los Gatos is the Guadalupe Creek – though the school district does not stop at the creek boundary, oddly enough. 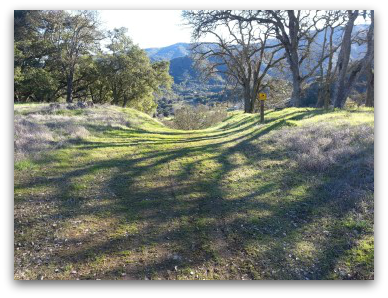 The next image, seen on the left, is of the Shannon Valley Ranch Open Space Trail. This connects to a network of trails in east Los Gatos though you have to cross Santa Rosa Drive to go from one to the next. Even so, from here you can reach the Santa Rosa Open Space, Heinz Open Space, and also Belgatos Park trails – whether you are walking, mountain biking, or riding horseback, it’s possible to go and go with only a very short patch on asphalt as you traverse Santa Rosa Drive.

The views are gorgeous from the Shannon Open Space trails, which is situated on the back side of Blossom Hill (the actual hill, not the road). Looking across, you see the coastal foothills and local landmarks such as Loma Prieta. To the east, you can enjoy views of Almaden and the east foothills, depending on your vantage point. The hill is not too steep – though I’m the first to admit that I’d rather be walking down than up!

Something to be aware of is that with all this open space there also comes wildlife such as coyotes, bobcats, deer, mountain lions, skunks, possums, racoons, rats, mice and snakes. Rattlesnakes are indigenous to this area and they sometimes like to come out on the trails to sun themselves, so please be careful when walking, running, or hiking or otherwise moving across these spaces. You don’t want to find a rattler with your foot! 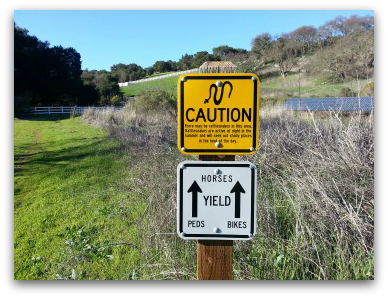 Here’s a sign that I found both disturbing and amusing regarding the presence of snakes (and also who’s got the right of way on the trail). I never knew who was supposed to yield to whom vis-a-vis horses, pedestrians and bicyclists – did you? But according to this sign, folks riding horseback are to give way to those on foot or bikes.

This upcoming winter it is expected (and frankly, after the prolonged drought, HOPED) that we will have an El Nino year with abundant rain. If you have never been out to the Shannon Valley Open Space area – do it sooner rather than later.

My better half, Jim Handy, used to be a volunteer Los Gatos Parks Commissioner (for about 7 years) and he created a map of the trails which you can see on Google for this part of town. Here’s the link to the Shannon Open Space and nearby trail areas.

But do watch for snakes! 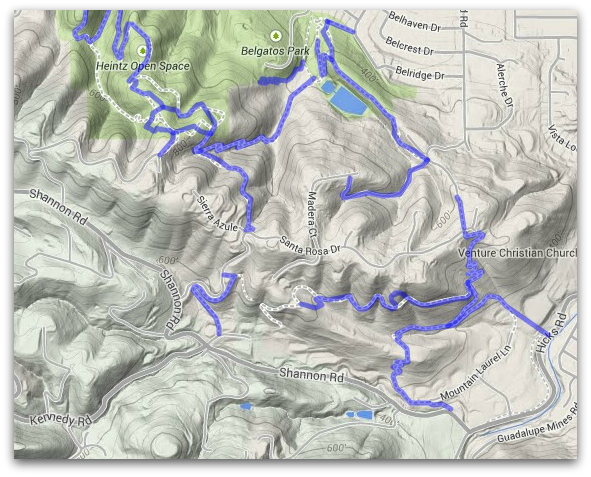