For this study I wanted to compare similar sized homes and lots in various parts of Los Gatos 95030 and 95032.  Extremely narrow parameters resulted in too small of a group, and I ended up using 2000 – 3000 SF houses on lots of 9,000 – 11,000 SF. There were 27 such single family homes sold in 2021, so not a large group. It is spread throughout the year since when I attempted to narrow it just to one quarter there were not enough homes.

Additionally, I wanted to look at three specific neighborhoods to check the pricing difference between them and their respective school districts as a whole. For this I selected the Old Adobe Road area in West Los Gatos, Blossom Manor with the Los Gatos Union School District, and the Belwood-Belgatos-Surmont area with the Union School District in East Los Gatos.

Here are the results of the 2021 pricing differences study (please note that homes may cost considerably more today as values are up quite a lot from last year):

Homes with Los Gatos Schools are the most expensive, followed by the homes in West LG, and then just a hair behind them are houses in East LG.

In the highest demand, as measured by the sale price to list price ratio, were the homes in Blossom Manor. That’s easy to understand because it’s a close to everything location, including Blossom Hill Elementary, Blossom Hill Park, and loads of shops, stores, coffee houses, and restaurants.

Next highest in demand for neighborhoods is the Belwood, Belgatos, and Surmont area, which offers the biggest bang for your buck in town.

What is the pricing difference for homes in these 3 school districts?

If we use a mythical 2300 SF house, here’s how the dollars would shake out: 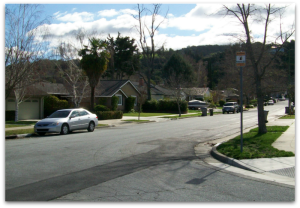 Alta Vista is a scenic neighborhood which includes homes in both the Cambrian Park neighborhood and the Town of Los Gatos. For many reasons, this area is highly valued and sought after. For this article, we’ll focus on the neighborhood immediately adjacent to the school, not the entire “area of school attendance.”

What makes Alta Vista so attractive? First, it’s convenient. The high performing schools are easy to walk or bike to without crossing any major roads. Almost as close is a good-sized Safeway, a coffee shop, and other stores and eateries at the nearby Downing Center. It’s easy to get to Highway 85 from Union Avenue, too.  As a bonus, the location is popular because of it’s vicinity to Los Gatos with the lower price point of San Jose (for most of the neighborhood).

Second, it’s scenic. Alta Vista has its fair share of visual appeal as well, with many streets lined with beautiful and mature trees, Ross Creek running along one border, and views of the nearby Blossom Hill and coastal range behind it. South of Blossom Hill on the Los Gatos side, it’s not far to the foothills with their trails and parks. Yards and homes are well kept and tidy, as are the streets. Parking near the schools only becomes a problem during school functions a few times a year (and of course at drop off and pickup times).

Simply put, Alta Vista is a scenic neighborhood with great schools and a convenient location. That’s a winning combination.

Above and below: a couple of homes along Blossom Valley Drive. 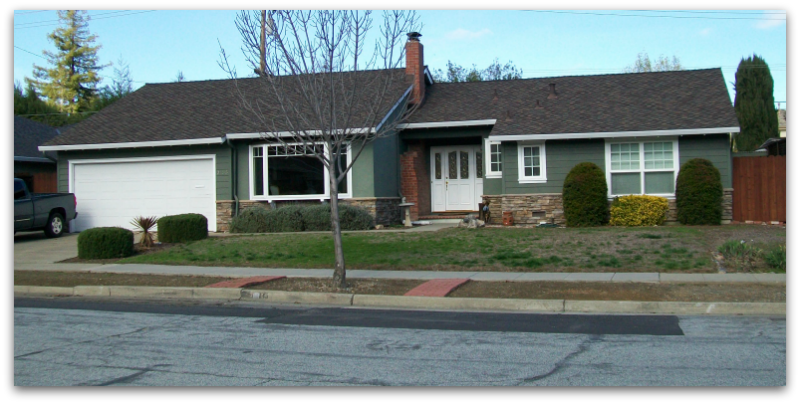 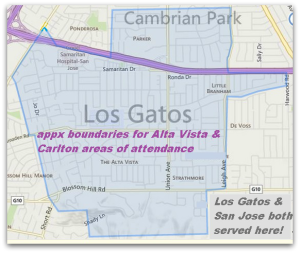 If you’re interested in buying a home in the Union School District, which straddles the Los Gatos and Cambrian area of San Jose border, you may be wondering what the real estate price difference is between homes in San Jose 95124 vs properties in Los Gatos 95032.

The Carlton Elementary School area of attendance, and even more the Alta Vista Elementary School area, offers the opportunity to own a home in either zip code, so seeing the pricing delta isn’t that hard. What is harder is ascertaining what ratio or range of ratios you might find when house hunting in these neighborhoods.

For single family homes sold in the last 30 days in either the Carlton or Alta Vista areas, here’s the breakdown (disclaimer, 17 homes sold & closed total for both LG and SJ in that time):

Here the gap in pricing looks huge. But is it? Homes and land are both bigger in Los Gatos. Biggest takeaway to me is this: in general, if you want a bigger home on a larger lot, Los Gatos is probably going to be your town. Buying “just the schools” and fine with a smaller house? San Jose provides a more affordable means to get into the schools.

Are there SIMILAR houses and lots to compare the true price differential between San Jose and Los Gatos with the same schools?

Everyone wants to make it a simple, easily measurable “cost” for living in Los Gatos, and I get asked about “apples to apples” between San Jose and Los Gatos? That is something that’s tricky for a number of reasons. But let’s try anyway.

This last weekend I was holding open my new listing in west Los Gatos at 212 More Avenue. A few people asked me how Los Gatos is faring in terms of appreciation now as compared to the height of the market a few years ago. While places like Cupertino and Sunnyvale are already well past that previous peak, other west valley communities are sneaking up on equaling it. The Alta Vista neighborhood, on the San Jose (Cambrian Park) and Los Gatos border, is precisely there (as is most of Los Gatos under $2 million). The Alta Vista neighborhood should hit peak pricing very soon. So far this year, there’s only one closed sale in this neighborhood due to very low inventory levels, but within a couple of months we should have more complete data, and I think by late summer we’ll see new highs.

I spent quite a bit of time on our MLS, pulling sales within a defined area of the map (between and including Blossom Valley Drive to Blossom Crest, over to Blossom Wood and across to Sycamore Ct. – basically all the Garcia built homes, mostly in Cambrian) going back to 1999 (that’s as far as the data seems to go). Some years had more sales than others. Most are in San Jose, a few in Los Gatos. Some have been added onto, and some are still small 1100 SF ranch style homes. All of those disclaimers aside, here’s how the average sold price per square foot looks, year by year, and where it appears to be headed with my red trend line (on par with the old high point).

So for all of you home owners who longed for those 2006 prices – looks like this may be your year! Call or email me if you’d like a no-pressure, no-hassle, no-obligation consultation on home selling here in the Alta Vista Neighborhood or anywhere in the greater San Jose area.