Where can you purchase the ubiquitous Los Gatos cat statues for your own home or yard?

At times, these can be hard to find, but recently we spotted them in two places and wanted to share that info with our readers. 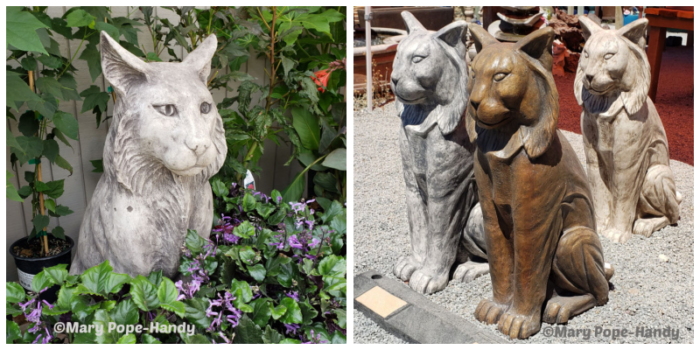 You’ll notice that they are not exactly alike, but similar. Oddly enough, both are on the same street, though in adjoining towns.

Where to shop for the Los Gatos cat statues:

The image on the left is from the SummerWinds Nursery in Campbell.

The photo on the right was taken at Pottery Planet.

I phoned the Los Gatos Chamber of Commerce to see if they are still selling them, as they once did, but was told no. However, the nice woman I spoke with let me know that they can also be found at Natural Creations. 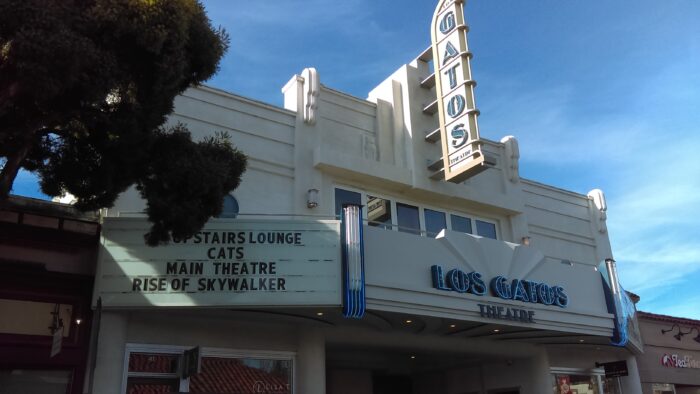 Jim, my better half, took this photo a couple of days ago. How natural that Cats should be playing at the Los Gatos Theatre, the town’s lovely 1915 art deco style theatre (nicely renovated in recent years).

People in Los Gatos love their pets. Not all of them – residents or pets – are well behaved, though.

One neighbor of ours in Belwood who recently planted new sod in his front yard got tired of locals allowing (encouraging?) their pets to relieve themselves on his newly laid lawn and put up two signs telling them not to do it.

Another neighbor, on another street, placed graphic “no pooping” signs along one side of the yard because not only were pooches defecating there, but their owners were not cleaning up after them, either.

Dogs are usually on leashes, so it’s hard to say that their owners don’t know any better. But what about cats who are allowed to roam freely and do what they want and where they want? Their messes become everyone’s problem too – the owners just don’t have direct knowledge of it.

We have this issue in our front yard, where a neighborhood cat seems to love to return again and again, and the stench from its markings can be unbearable – especially early in the morning when stumbling out to get the newspaper. (Maybe it’s to taunt our black lab, who can’t get at the cat?) Jim periodically uses some nasty sprinkles from a company called Predator Pee (not making this up!) to keep the felines away. It works, but it, too, is smelly. Wouldn’t it be nicer if cats only stunk up their own yards? (Aren’t cats safer if kept indoors, too?)

C’mon, Los Gatos: let’s be good neighbors and make sure that our pets are good neighbors, too. On top of that, having your animals eliminate on other’s yards is actually against the law.

No person owning or having control of any animal shall permit such animal to stray or run at large upon any public street or other public place, or upon any private place or property or common area of any planned development, cluster, townhouse or condominium project, without the consent of the owner or person in control thereof.

Town of Los Gatos Code regarding animals peeing & pooping on someone else’s yard:

(a) No person owning or having control of any animal shall permit the animal to do any of the following:

(1) Defecate or urinate on private property (other than that of the owner or the person having control of the animal);

(2) Defecate on public property without immediately removing the excrement to a proper receptacle;

(3) Permit an animal to obstruct or interfere with the reasonable and comfortable use of property by chasing vehicles, molesting passersby, barking, howling, baying, or making any other noise;

(4) Permit unsanitary conditions to exist on the premises where that animal is kept that would cause odors, attract flies or vermin, or otherwise be injurious to public health and safety, or be indecent, or offensive to the senses, or be such an obstruction to the free use of property so as to interfere with the comfortable enjoyment of life or property by other persons.

(b) The animal control officer may seize and impound any animal causing or creating a public nuisance.

(c) A violation of this section is hereby declared to be a public nuisance.

(d) Any private person may maintain an action under Civil Code section 3493 for enforcement of this section declaring certain acts a public nuisance, if such acts are specifically injurious to that person.

Ever want to give your out-of-area visitors something special to welcome them to Los Gatos, or to send home with them as a parting gift and a happy memory of days here?  Something wonderful, small, and deliciously local are the chocolate cats, shaped like Leo & Leona, which can be purchased at the Chocolate Dream Box at King’s Court Shopping Center.

These chocolaty goodies are easily packable – they’re not much bigger than an adult finger.  They come in milk and dark chocolate so are sure to please everyone.  (I wouldn’t mind seeing them come in white chocolate too 🙂  For some reason, they are not listed on the store’s website along with most everything else that’s mentioned on the Flavors page.

(This is not a paid post – as with all my posts mentioning local businesses which I like and patronize, it was my idea to write this up and I receive no compensation or perks for doing so.)

It had to happen. The Town of Los Gatos, meaning The Cats, has long been a haven for dogs. Stroll down Main Street, University Avenue or North Santa Cruz Avenue and you’ll see water bowls left out for pooches. Or you’ll discover places to tether canines near the shops. Dog lovers almost seem to have a magnetic attraction to this corner of Silicon Valley. The irony is not lost on the locals.

So it’s no secret: The Cats is really a town for dogs. At Halloween, we always have a dogs in costume parade. There’s even talk of creating a dog park in Los Gatos.

It should come as no surprise, then, that the town’s mayor, Barbara Spector, has declared May 17th the Dia De Los Perros. The only question I have is this: will it be an annual event? Let’s see how the first one goes. Maybe it’s true, after all, that the town of Los Gatos is “going to the dogs”.

The Los Gatos Observer did a nice piece on this event, titled “Los Gatos Goes to the Dogs“. Check it out!