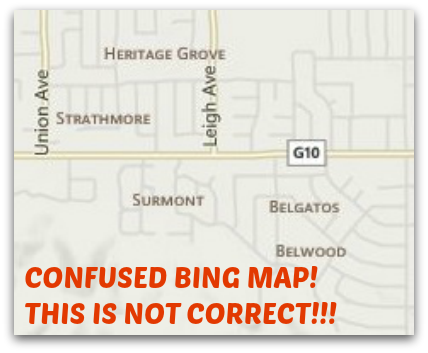 Too often, we think that the search engines know it all, and that includes the maps and names for neighborhoods or subdivisions and where they’re located. Real estate agents or Los Gatos Realtors who want to get ahead sometimes begin by using Bing maps (since Bing has been volunteering subdivision names for awhile now) and create searches of homes for sale based on them, and articles reliant on these mislabeled maps, so getting it all wrong. Surmont and Heritage Grove in east Los Gatos are prime examples!

Bing has Heritage Grove north of Blossom Hill Road and set between Leigh and Union. It has Surmont spanning both where it belongs and where Heritage Grove actually sits. Bing doesn’t know what to do with Belgatos and Belwood, so put one slightly north of the other.

For the record, I did submit a “ticket” to Bing to alert the good folks there to the problem. Not a peep back so far, though.

The divider between Belwood of Los Gatos and the Belgatos area is Belgatos Road (think east-west, not north-south). Surmont is to the west of them…but only the area which is contiguous with Belgatos and Belwood. The part that isn’t contiguous (that you have to reach via Blossom Hill Road) is the much, much younger Heritage Grove.

I mapped it out myself based on plat maps from preliminary title reports. I know it’s not elegant looking but it is pretty accurate overall.

Sometimes it is really not clear where one subdivision or neighborhood ends and another begins. That’s when it is especially handy to be able to look at a plat map, which sets forth all kinds of very cool information.

Not sure what a plat map is or does? Have a read at my Valley of Hearts Delight blog:

Want more information on the beautiful Belwood of Los Gatos, Belgatos or Surmont areas? Check out the mini blog for this corner of east Los Gatos: