The Loma Brewing Company Grand Opening took place a couple of nights ago and it was both extremely well attended and well received. By 4:45pm, a few dozen fans and friends had gathered near the front door of the brewpub, awaiting the ribbon cutting and the chance to enter Loma for the first time.  The owners, Scott Youkilis (image left in blue shirt) and Kevin Youkilis (right side of photo), each held one end of the ribbon, and Barbara Spector, mayor of Los Gatos, cut it with a large, gold, ceremonial pair of scissors. Also shown is the talented BrewMeister, Warren Billups (just behind Scott).  Apologies that I do not know the names of the others in this photo. 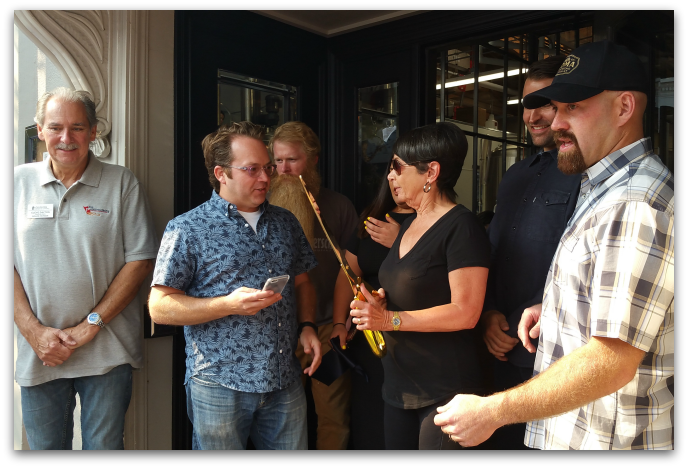 Inside, Loma Brewing Company Grand Opening was an immediate mob scene!  Someone at the reservation podium was asking who had reservations (had I known that was possible, we’d have reserved, but that wasn’t the case so we made a beeline for the bar).  I was extremely impressed that the staff handled the hyper rush with speed, skill, and calm.   (This wasn’t just any rush: this was the entire place filling up instantaneously!)   The staff was amazing. 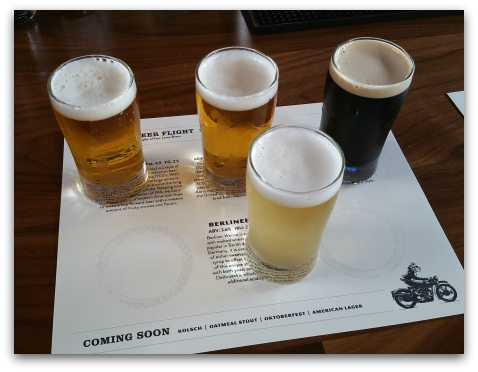 I wanted to try a flight of beer to get a sampling and to take me out of my comfort zone a little. My better half, despite living in Belgium for four years, is not a beer fan, but there were tons of other offerings and he was very  happy with a glass of wine.  All of the beer I tried was delicious. Most surprising to me was how mellow the stout was. I’ve been to the Guinness Factory in Dublin, and  honestly, this was far better.  Kevin Youkilis told me that they use a  different process involving nitro which seemed to take out the bite.   All four of them were great, but I only finished one – and to my surprise, it was the stout. (Even if you don’t usually like the darkest of beers, give it a try!)

Unfortunately, we couldn’t stay long enough for a meal, or for me to finish my flight completely, as we had another grand opening to attend at the same time, so after an hour we needed to get going.  We did peruse the menu, which was impressive and offered quite a few temptations.  Many patrons were eating around us, and the food looked wonderful. Very few breweries around here seem to qualify as a Gastropub, so I’m anxious to try the food next time.

Old brewery location, but not the old brewery

Some Los Gatans may have been expecting a revival of the former brewery on this site, the Los Gatos Brewing Company.  That would be a mistake, despite the same physical address.  This is a whole new venture, with new owners, new beer, new food, new equipment, new recipes, new talent, new everything. Go to it with an open mind, not expecting to see or taste or experience what was there before.

Loma Brewing Company has been set up with the contemporary and low key warehouse style of decor, which is so popular today. (As with the new Super Duper Burgers and also the new Mooya Burgers, both in Los Gatos, or with the many public markets springing up around the state.)    I did not notice an acoustics problem, which seems to happen with the warehouse style, so kudos to their designer for addressing that so well.  We sat at the bar and it was comfortable in every way. And I appreciated the hooks for purses there, too.

If you love beer, you will love this place.

Prior posting on the Grand Opening:

The Loma Brewing Company Grand Opening will take place on Thursday, August 18th, per the brewery’s Facebook page and the Loma Brew website:

Join us for our grand opening celebration on Thursday, August 18, starting with a ribbon cutting at 4:45 p.m., followed by our official opening at 5:00 p.m.

We will be open for dinner from 5:00 – 9:00 p.m. daily. In September we will extend our hours and begin serving lunch as well as weekday happy hour, in addition to dinner nightly. Stay in the know by signing up for our newsletter and following us on social media for the latest Loma updates – @lomabrew.

We look forward to serving you – cheers!
The Youks and Team LBC

More info on Loma Brewing Company on this site

The Loma Brewing Company will be opening in Los Gatos (at the location of the former Los Gatos Brewing Company) soon, perhaps even by the end of this month, per their Twitter feed:  https://twitter.com/LomaBrew  The same site said they’re doing their first brew this weekend – we wish them good luck!

The BrewPub is owned by Kevin Youkilis and his brother, Scott Youkilis.  The magazine DRAFT just put out a nice article on them and their venture that’s a good read if you’d like the back story:  http://draftmag.com/kevin-scott-youkilis-loma-brewing-los-gatos/

As for the food, a little research turned up great info on both the who and the what of it.  In a recent piece, Zagat profiled the 12 most anticipated restaurant openings in the San Francisco Bay Area this summer, and commented on the offerings to come at Loma:

We wish them much success with the last details and look forward to their grand opening soon.

PS –  Related: previously, it was thought that this new brewpub would be called the Foglight Alehouse, but the name changed. Prior article on this new brewery can be seen here:    https://liveinlosgatosblog.com/new-restaurant-foglight-alehouse/

Restaurant newsflash – the Los Gatos Brewing Company is closing, and in its place will be Foglight Alehouse, owned and operated by noted San Francisco chef Scott Youkilis and his brother, a retired major league baseball player, Kevin Youkilis.  Apparently they’ve been interested in opening up an alehouse here in Los Gatos for awhile, as Kevin and his family live in nearby Monte Sereno.  We wish them every success and can’t wait to check it out!

The brewpub’s name is now the Loma Brewing Company.  More info on the new brewery can be seen here on this blog: