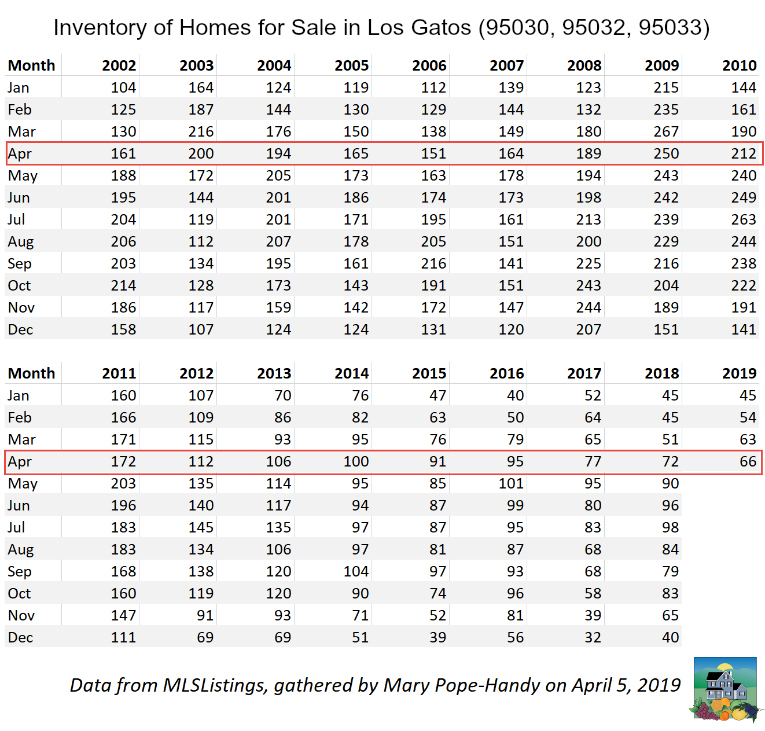 Of that low inventory of just 66 homes, which part of Los Gatos are they in?

How far does your money go in Los Gatos, whether 95030 or 95032, and how does that compare to our nearby neighbors of Saratoga, Almaden, Cambrian, Campbell, Cupertino or San Jose, generally? Today I am snagging a chart from my Altos Research Reports which give a good sense of what a million dollars (or other amounts) can get for you in these areas. These charts use LIST PRICES, and remember, the sales prices are often different (frequently more!). Let’s have a look.

This is the more central part of town, the area closest to downtown Los Gatos and most of it is “in the schools”. Here a million dollars is unlikely to get you a house at all, though it could be something small that needs a lot of work if not in the downtown area…maybe….

Conversely, although about 1/3 of this area is in the Los Gatos Union School District, most of it is not, and this area is usually (though not always) further out so less expensive for both reasons. Interestingly, the high end prices aren’t so far apart between 95030 and 95032 from this vantage, but the gap widens a lot at the bottom quartile. In 95032 a million will get you a small house, most likely in east Los Gatos (west is a little more expensive, usually) – and it will probably need work. Something to note is that all of the elementary and middle schools in Los Gatos, no matter which school district, are high scoring, high performing institutions. The scores do change at the high school level pretty noticeably. But the improving schools in the further out areas of LG, especially in east Los Gatos, is causing the pricing gap to shrink somewhat.

So in Los Gatos, $1 million is unlikely to get you a house, though it may if it is small and not too close in to downtown (or if you are buying land value).