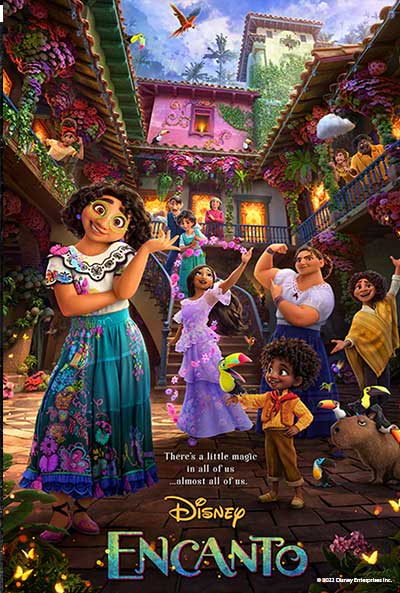 Screen on the Green is back and the film this year will be Encanto.

The event will be Friday, Sept 23, 2022 at Oak Meadow Park, which is the normal venue for Screen on the Green.  The film will start running at 7:30 p.m., but if you go early, you can enjoy the carousel, the train, and snacks starting at 6 pm.

Attendees, it is important to bring layers and something low to sit on – blankets, cushions, or low backed lawn chairs, are alright. I always bring a flashlight for after the show. The gopher holes in the lawn at Oak Meadow are easy to find by accident with your foot.

Screen on the Green additional info

For additional details, please see the Los Gatos town website page for Screen on the Green by using the link or clicking on the image to the right.

A fascinating, but little known fact of Los Gatos history is that our quaint town has been the setting for quite a few movies over the years. This was especially true in 1910 and 1911, when the Essanay Film Production Company (“S” and “A” for the initials of the founders) took up residence in the Lyndon Hotel (see image and floorplan) for a few months.

Prolific to the extreme, Essanay cranked out a film a week – sometimes more. In 1911, for instance, they produced 99 silent films!  Not all of these were in Los Gatos, however. (This is the same firm that a little later produced so many movies in the Niles Canyon area of Fremont too.)

Looking for the right climate for their outdoors work, Essanay had moved west from Colorado, landing first in San Jose and then moving the 10 miles further west to Los Gatos. They were able to set up their production studio right behind the Lyndon Hotel, where they resided at the time.  Additionally, they discovered the hamlet of Alma (which was flooded in 1952, along with the town of Lexington, to create the Lexington Reservoir) just up the hill into the Santa Cruz Mountains, and many of their movies were filmed there too.

Unfortunately for the folks at Essanay, the winter of 1910-1911 appears to have been a particularly bad El Nino year. In one four day period in January, the town received 16 inches of rain.  That much water caused countless problems with accessibilty and it convinced the film production company to seek an alternate location after their work ground to a halt for about 5 weeks. So in February of 1911, they left soggy Los Gatos and next went south, toward Los Angeles. Thus ended the brief but prolific history of Los Gatos and the Essanay Film Production Company. They did not stay away from the San Francisco Bay Area for long, though. Later in 1911, Essanay filmed in San Rafael and by 1912 was esconced in Niles.

That was not really the end of the story for Los Gatos, though. A total of 23 films were made here, the most recent of which was just last year, and you can see list by clicking on the link below under more information.

And why should we be surprised? Los Gatos normally has wonderful weather and the beautiful backdrop of the Santa Cruz Mountains (not to mention our lovely older buildings). Imagine how long Essanay might have stayed if it weren’t for a bad bout of El Nino!

If you’d like to read more about Essanay, I highly recommend a book I gave to my husband last Christmas, Broncho Billy and the Essanay Film Company. The author is David Kiehn and it was written in 2003. You can order it on Amazon and it is available in some bookstores.

If you’d like more information on which films (older and newer) were made in Los Gatos, The Internet Movie Database has lots of info, both a simplelist of movies made here and also details on each one.