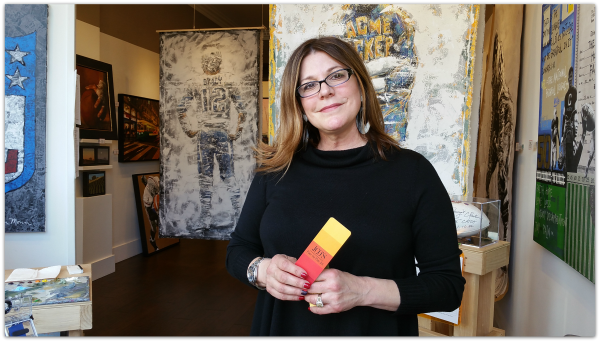 Love fine art?  A fun place to stop in and get tempted by the work of creative people can be found in downtown Los Gatos at JCO’S Place, located on University Avenue (address is near the bottom of this article).

A few years back, when JCO’s was located on N Santa Cruz Avenue near the theater, I was strolling past this gallery with my daughter, plus my visiting niece and nephew, who hail from Boston, and noticed some beautiful, over-sized paintings.  I did a double take when I saw one of Tom Brady, # 12, as you don’t normally find a lot of Patriots art here in Los Gatos.  Stepping in, that wasn’t the only piece from the Northeast. It was a surprising find!

Not everything is Brady, Patriots, and Boston – there was plenty of other football art on display to keep in the theme of the game for this season and the multiple celebrations of SuperBowl 50 here in Silicon Valley. To get a better sense of the diverse offerings, check out the blog portion of her website: http://www.jcosplace.com/art-blog .

Why the Tom Brady and Patriots focus? I wish it were because they would have been in an upcoming game.  Instead, it turns out that the proprietor of the store, Julie Jenkins, hails from Boston.  I had a fun talk with her.  She is very warm and welcoming, and I’d love to come back to see what she brings in next.

The shop also had an artist painting and visible from the window, Nick Brown, a very talented guy.  What I saw looked quite a bit like our eastern foothills, but I didn’t get a chance to talk much as my younger relatives were ready to continue our walk through downtown Los Gatos.

Next time you are out for fun in downtown LG, take a few minutes and stop by JCO’s Place.  I think you will enjoy it! 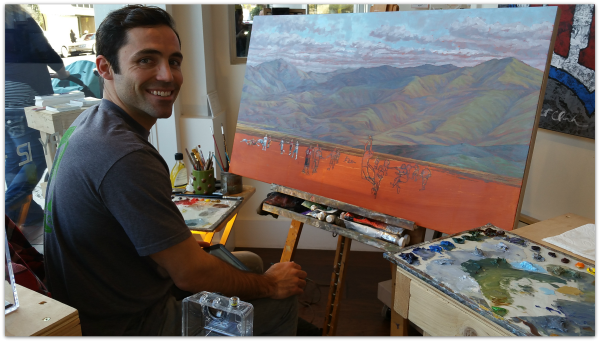 Hours: As of this writing, closed or by appointment Mon and Tues. Check the most current hours on the site: http://www.jcosplace.com/visit.html

Where will you go to watch it?  Need a suggestion?

Two good possibilities in downtown Los Gatos are the town’s sports bar, Double Ds, and also the Los Gatos Brewing Company (which just might be less crowded). Double Ds has tons of television screens facing every which way. The Los Gatos Brewing Company offers one 62″ and four 42″ televisions, all high-definition. I patronize both establishments and really like both of them a great deal – each gets a “two thumbs up” for food, service, and ambiance in my book. Either way, you can’t really lose, but there are more tvs at Double Ds and more parking  at the Brewing Company. My suggestion, no matter which you choose: get there (either place) before kickoff if you want to have a table.

At Casa de Pope-Handy in the Belwood area of town, we have a few friends joining us to watch the game and cheer on the Patriots (the Quarterback, local boy Tom Brady, is a cousin of mine so there is nothing neutral in our allegiance).  I’d like to see the Pats break another record and make history this year…and then have only themselves to best in the future.

Going to a bar alone is really out of my comfort level, but even more so when I’m not even meeting someone there.

But that’s exactly what I did yesterday, and it’s Comcast’s fault.

Why? Because Comcast did not broadcast the NFL “Game of the Century” – the Patriots vs. the Colts. Last week I saw a (national) television ad that it would be shown. Being played at Indy, the game was on yesterday afternoon starting at 1:15pm local time.

But when I looked at the television listings for Sunday, I was shocked and appalled that this incredibly significant game wasn’t listed as being televised. We’re talking about the game between arch rivals. The game where both went into it undefeated this season, 8-0.

I did what any paying customer would do: I phoned Comcast. “Can I upgrade the sports package and watch the game?” I asked, rather than complaining. “No, ma’am, Comcast isn’t showing that game west of the Rockies.”

Incredible. Obviously, I should have satellite television instead of Comcast if I’m going to live in Los Gatos…or apparently anywhere “west of the Rockies”.

Perhaps I should explain why I’m a passionate Pats fan while living in Niners (and Raiders) country. The quarterback, Tom Brady, who hails from nearby San Mateo, is my second cousin. I always liked football – I think I attended every Saratoga High and Bellarmine College Prep game when I was a teenager. (My college, Gonzaga University, didn’t do football. Basketball was – and is – king in Spokane.) I didn’t grow up watching the Niners or Raiders except occassionally on t.v. But when you have a cousin on the field, it changes everything. Or, as I like to say, “blood is thicker than geography”. (We have loads of other family in the area too, including my sibs and their families and other cousins.)

Anyway, all of this to say that we’re Patriots fans and I watch any Pats game that Comcast will deign to put on the air. I was certain that the Patriots vs the Colts game would be aired – heck, I saw the ad on TV that asserted it would!

The only alternative was to go to a sports bar. Happily, in Los Gatos we have a wonderful one, Double D’s. I phoned them one minute after they opened to ask if they’d be showing the game. “All over!” the gal reassured me.

My husband and kids weren’t able to go with me. I tried calling one friend to see if she’d go – she would have but was in southern California with her mom, who’d been ill. Most of my other friends really don’t watch football games on television. Since I was sure the game would be on tv, I just hadn’t planned out going to a bar to catch a little football.

I went alone to Double D’s to watch at least part of the game. The place was packed!! Saw the first half – the Pats were trailing as it went into the halftime show and it had been hard-fought to that point. I enjoyed a beer and a burger and watched some great football on a huge, super clear screen. Only problem for me was that I don’t know all the refs’ hand signals and there was such an enthusiastic crowd at Double D’s that it was difficult to hear anything.

For that and a lot of other reasons, I still prefer watching the game at home. But I was thankful to be able to see it at all.

I had been sitting next to a guy named Oscar who was sporting a # 12 shirt (and who told me that for Halloween he “was” Tom Brady) and told him as I left at halftime, “they have often come from behind in the second half, and I bet they do it today”.

Back at home, there were things I had to do but I kept my computer logged in to NFL.com, where at least I could follow the score and read the plays, if not see what was going on. The fourth quarter was wild. My teens were attempting to finish the weekend’s homework load but I updated them on the game fairly frequently. What an upset! The Patriots charged back in the last quarter, reversing the lead and winning 24-20 there on the Indy homefield.

Congrats, Patriots! I knew you could pull it off!

Thank you, Double D’s, for showing this game. Obviously a whole lot of other folks wanted to see it “west of the Rockies” too.

And Comcast? Today I’m going to see what it costs to install satellite television. . . .

As with other blog posts highlighting local businesses in Los Gatos, this is not a paid post but again this blogger’s positive experience with a locally run place.