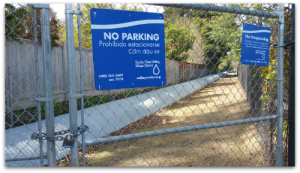 When the San Bruno fire and explosion occured, many Bay Area residents wanted to find out where PG & E’s major gas pipelines were located.  Rightfully so, as there’s a risk associated with being too close to a major gas artery.

What about water transmission lines – the large distribution pipelines? Water, too, must come to neighborhoods and do so via distributory pipes.  As with any infrastructure, repairs and replacement will sometimes be necessary.  And at times, the need for the work will become apparent only when there’s a problem.  The Santa Clara Valley Water District reports that it has 140 miles of pipelines.  There are periodic failures and leaks – google the question and you will see repairs in the last 5 years in various parts of Santa Clara County.  Today’s San Jose Mercury News sports a front page article on an 8 foot high, 31 mile long pipe which suffered an enormous leak last summer.  This pipe supplies about 40% of the drinking water to Santa Clara County.  Luckily, where the breach happened the property damage was minimal – only a meadow flooded as it was near Casa de Fruta along Pacheco Pass.  The Merc tells us this:

On Aug. 1, a section of the underground pipe suffered “catastrophic failure,” sending 15 million gallons of water into a cow pasture near Casa de Fruta along Highway 152, according to water district staff reports.

At 5:30 that morning, water district technicians at the Rinconada Treatment Plant in Los Gatos noticed a sudden change in pressure. Realizing they had a break, they shut off valves and stopped the gusher within an hour.

How fortunate that this major break happened in a rural area.  But I find myself wondering, as with the gas pipeline, if instead of flooding a meadow, could it have destroyed homes?  Of course.  Fifteen million gallons spewed over just one hour could be devastating.

That said, I suspect that most of the distribution lines going into neighorhoods are not as big as this transmission line, which sounds like the major artery for our area.

Where are the distributory pipelines in Los Gatos, and in the San Jose area generally?

Home owners don’t usually know where these lines are, and home buyers are unlikely to learn their whereabouts.

If you are buying a home in Silicon Valley, you will be given a Preliminary Title Report and that will include easments relating to the property in question.  If a water distribution pipeline is on or next to your property, it would likely show up on that report and visible on the plat map.

If the distributory pipeline does not create an easement, though, it is very likely that it will not be disclosed because the home owners usually do not have the slightest idea of its existence or proximity.  We have natural and environmental hazard reports to let us know about earthquake faults, underground water contamination, and many other important things, but to the best of my knowledge, the location of large water lines is not included.    I have looked all over the Santa Clara Valley Water District’s website to see if they offer a map of the distribution lines, but I’m not finding them.  I’ll inquire, do some more research, and hope to add to this discussion soon.

If you have info on this topic, please email me.  (I’ve had to disable comments because I was getting 1,000 spam comments to 1 real one.)