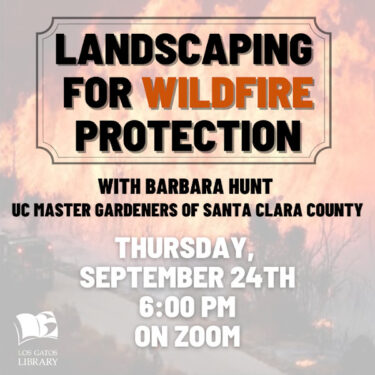 The Los Gatos Library will host an online class, Landscaping for Wildfire Protection

Does your garden fight fires? With fire season growing longer and fiercer each year with devastating losses, you might be wondering what you can do to lower risks and protect your property against wildfires. Especially if you live near one of the Bay Area’s beautiful greenspaces! Join the Los Gatos Library with speaker Barbara Hunt, UC Master Gardeners of Santa Clara County, to learn about how wildfires spread and how to landscape to protect your home, from hardscapes to fire-resistant plants. This is a free lecture aimed at California homeowners but open to all.

For more information and the Zoom link, please view the event page.

Join the event on Facebook and set a reminder.

Want to learn more about fire in Los Gatos? Check out some of my other posts on this topic:

People in Los Gatos love their pets. Not all of them – residents or pets – are well behaved, though.

One neighbor of ours in Belwood who recently planted new sod in his front yard got tired of locals allowing (encouraging?) their pets to relieve themselves on his newly laid lawn and put up two signs telling them not to do it.

Another neighbor, on another street, placed graphic “no pooping” signs along one side of the yard because not only were pooches defecating there, but their owners were not cleaning up after them, either.

Dogs are usually on leashes, so it’s hard to say that their owners don’t know any better. But what about cats who are allowed to roam freely and do what they want and where they want? Their messes become everyone’s problem too – the owners just don’t have direct knowledge of it.

We have this issue in our front yard, where a neighborhood cat seems to love to return again and again, and the stench from its markings can be unbearable – especially early in the morning when stumbling out to get the newspaper. (Maybe it’s to taunt our black lab, who can’t get at the cat?) Jim periodically uses some nasty sprinkles from a company called Predator Pee (not making this up!) to keep the felines away. It works, but it, too, is smelly. Wouldn’t it be nicer if cats only stunk up their own yards? (Aren’t cats safer if kept indoors, too?)

C’mon, Los Gatos: let’s be good neighbors and make sure that our pets are good neighbors, too. On top of that, having your animals eliminate on other’s yards is actually against the law.

No person owning or having control of any animal shall permit such animal to stray or run at large upon any public street or other public place, or upon any private place or property or common area of any planned development, cluster, townhouse or condominium project, without the consent of the owner or person in control thereof.

Town of Los Gatos Code regarding animals peeing & pooping on someone else’s yard:

(a) No person owning or having control of any animal shall permit the animal to do any of the following:

(1) Defecate or urinate on private property (other than that of the owner or the person having control of the animal);

(2) Defecate on public property without immediately removing the excrement to a proper receptacle;

(3) Permit an animal to obstruct or interfere with the reasonable and comfortable use of property by chasing vehicles, molesting passersby, barking, howling, baying, or making any other noise;

(4) Permit unsanitary conditions to exist on the premises where that animal is kept that would cause odors, attract flies or vermin, or otherwise be injurious to public health and safety, or be indecent, or offensive to the senses, or be such an obstruction to the free use of property so as to interfere with the comfortable enjoyment of life or property by other persons.

(b) The animal control officer may seize and impound any animal causing or creating a public nuisance.

(c) A violation of this section is hereby declared to be a public nuisance.

(d) Any private person may maintain an action under Civil Code section 3493 for enforcement of this section declaring certain acts a public nuisance, if such acts are specifically injurious to that person.