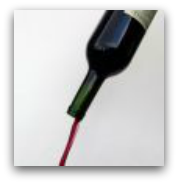 One of my favorite Los Gatos stories, or series of stories, was of mountain vintners who fought fire with wine.

That’s right. The as the fires raged, water ran out, so they used the wine to fight the fires.

That might seem shocking initially  – after all, it’s the loss of a year’s work. But if the vines were consumed by fire, it could take 20 years to get them back to their previous level of productivity.

And can you imagine how the townsfolk felt when the Los Gatos Creek ran red from Cabernet or Merlot or Claret? They probably thought it was the end of the world!

I think it is in line with the entrepenurial spirit of our valley that even in fighting fires, these folks were truly thinking outside the box.  They were willing to try something offbeat to protect the future.

Last Sunday was Earth Day.  And it got me to thinking about what we can do. . . .

I know that we in Los Gatos can help create innovative solutions to ecological problems.  Sometimes the answer is right in front of us and we only have to be thinking differently to recognize it.  The townsfolk care about solar energy and other conservation approaches.  “Fighting fire with wine” was a great concept that worked – twice.   I think it’s time for the creativity of Los Gatos to emerge to help solve the problems of the land in a new era.  What are the solutions to today’s environmental crises that are at our fingertips but we’re just not recognizing yet?