In 1940 construction began to widen, straighten, and modernize Highway 9. This was eagerly welcomed by locals who hoped to ease beach traffic and to eliminate the infamous ‘Death Curve’ at Austin Corners. The project was a success and the once bustling, popular, and even notorious, Austin Corners has since become a nearly forgotten by way. 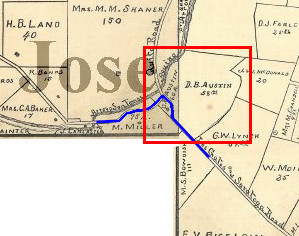 Historic Maps from History San Jose highlighted to show DB Austin’s property of Los Gatos-Saratoga Rd and Quito. Click to go to the source of the maps.

The name Austin comes from Captain Daniel “Dan” Buckley Austin, who purchased 60 acres of land 1.25 mi from Los Gatos around 1882. By 1888 he sold all but the 2.25 acres of his parcel surrounding his home, though the area would keep his name for centuries to come.

Mr. Austin was one of the original stockholders and directors of the Los Gatos and Saratoga Wine and Fruit Company, and his property became the location for the Plant from 1885-1919. The Wine and Fruit Plant was a community effort, “built by local growers… to facilitate the processing of grapes” (LG History Research Collection) and its managers were respected members of the community, such as orchard owner Alfred Malpas and Antone Anderson. Mr. Austin did not live to see the Plant’s destruction due to prohibition in 1919.

Mr. Austin was heavily influential in the creation of a school house and a school district in this part of the county. The original Austin School District’s single room schoolhouse was built on his property in 1884, and was used until a new schoolhouse was built on the same location in 1913 at what is today 19010 Austin Way. This school district was incorporated into the Saratoga School District in the 1920s, and when the highway was straightened the old schoolhouse was raised and replaced with an Arts and Crafts style building that would be used as a nursery school for years (Saratoga History Newsletter March 2009).

A Trip to the Corner 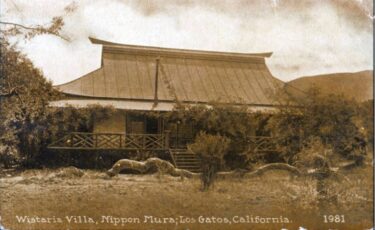 Austin Corners was not just a draw for locals, however, but a popular spot for travelers as well. By the 1890s a spot known as the “Cottage” was a happening spot for travelers to feast and dance, or rest for the night. Though its reputation varied over time, from family resort to popular roadhouse (and 10 years after its destruction “bad things were told of it”(Why Vote Out the Roadhouse? SJ Mercury News April 25, 1912)), you could be assured it had a steady flow of guests, drink, and fresh trout in season.

During Independence Day celebrations in 1900, a stray firework burned the Cottage to the ground (San Jose Herald July 5, 1900). The site was later used for a shop and “one of the best blacksmith shops in the region.” (SJ Mercury April 25, 1912)

By 1901, the Nippon Mura Inn was open and Austin Corners was accepting guests once again. It was built by Mr. Theodor J Morris and his wife, with the help of her sister Miss Helen F Nickerson, along the line for the electric railway (often called the Interurban) and had a dedicated stop (History of Santa Clara County, California p. 1214). This Japanese style luxury resort had summer cottages were connected by an Asian themed garden featuring a grand tearoom. Helen Nickerson became an Austin School District Trustee and worked diligently on the reconstruction of the original schoolhouse in 1913 (San Jose Mercury News Jan 4, 1913), which neighbored the property.

The site of Nippon Mura changed hands and names but it remained a high-end hotel and restaurant for decades. For roughly half a century, it was La Hacienda Inn. Over time, it’s faded from its former glory, however, and the site was absorbed in 2018 into Monte Sereno with plans to develop the (highly contended) Montalvo Oaks Subdivision by Summer Hill Homes, which is under construction.

As automotive travel became more popular, travel through Austin Corners transformed again. In 1934, the Interurban Railway ended its operations through Los Gatos and Saratoga. In 1920, Mr. Mervin A Davenport purchased 2 acres at the Corners, where he developed a thriving garage business (History of Santa Clara County, California p. 1258). A popular route as ever, the roads from Santa Clara County to Santa Cruz were loaded with treacherous hills, slopes, and curves, so this business was profitably located. Over time, the roads were improved, and by the 1960s, the Austin Corners Garage which had once been a booming business on a busy road was now a leftover by street and considered an older community (LG History Research Collection).

The End of the Corners

Over time, history has been mostly paved over. Around 2006, the last of the Interurban tracks at Austin Corners, which had been visible for decades after their last use, were paved over. Nippon Mura’s Japanese architecture was still visible under many layers of redecoration as late as the 2000s, but has since been razed for the new construction. By 1994 the old Austin Corners Garage had been incorporated as a façade into a new two-story home.

Austin Corners has been bypassed by the new Saratoga-Los Gatos Road, split between Saratoga, Monte Sereno, and Los Gatos, and rebuilt into housing, but a bit of history still remains. Austin Way follows the old road, its sharp turns reduced to residential speeds. A section of Austin Way to the south of highway 9 in Saratoga has remained brick-paved for roughly a century and has gained the designation of a Heritage Lane by that city. 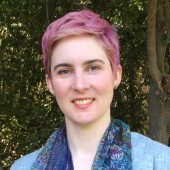